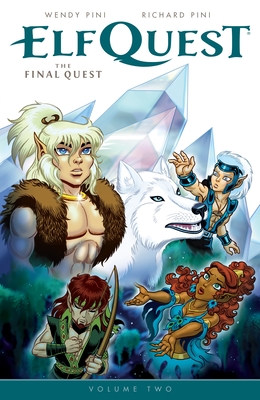 It is time. Sunstream, son of Wolfrider chief Cutter Kinseeker, finally fulfills his destiny and becomes the psychic link among all the elfin tribes scattered across the World of Two Moons. At long last, the seeds planted 20,000 years ago in the original, classic Quest can come to fruition. But a devastating secret, long hidden in plain sight, is also moving into the light. When the full impact of this revelation becomes known, it will affect the entire elfin race forever.

Volume 2 collects Wendy and Richard Pini's issues #7-12 of The Final Quest, the newest adventures of the Wolfriders!

"If youre looking for some engaging fantasy, dont miss Elfquest: The Final Quest! Its something special and will pull you in from the first time you read it!" -majorspoliers.com

In 1977, a deeply personal project called Elfquest was born. As the first continuing fantasy/adventure graphic novel series in America to be co-created, written and illustrated by a woman, Elfquest became a phenomenon in the comics industry. Appealing to comics and sci-fi/fantasy fans alike, it attracted a unique and unprecedented audience, an equal mix of male and female readers. Over three million copies of the collected graphic novel volumes have been sold to date. The author lives in Los Angeles, CA..
Loading...
or
Not Currently Available for Direct Purchase