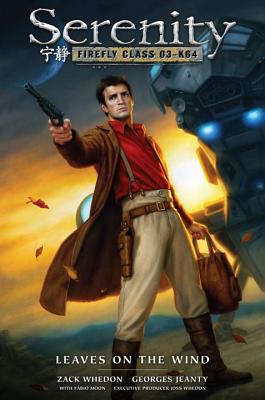 Leaves on the Wind

By Joss Whedon (Created by)

In the film Serenity, outlaw Malcolm Reynolds and his crew revealed to the entire 'verse the crimes against humanity undertaken by the sinister government--the Alliance. Here, in the official follow-up to the film, the crew has been in hiding since becoming everyone's most wanted, and now they are forced to come out. River uncovers more secrets, leading these former Browncoats on a dangerous mission against the Alliance that, with hope, will bring them together again . . .

Zachary Adam "Zack" Whedon is an American screenwriter and comic book writer. He graduated in 2002 with a film degree from Wesleyan University where he served as president of the Eclectic Society. Zack is from a family of writers: he is the son of screenwriter Tom Whedon, grandson of screenwriter John Whedon, and the brother of screenwriter/musician Jed Whedon and producer/director/writer Joss Whedon.
His first professional work in television was as a production assistant on his brother's series Angel. Whedon joined the crew of the HBO western drama Deadwood as an assistant to executive producer David Milch for the first season in 2004. The series was created by Milch and focused on a growing town in the American West. Whedon returned as Milch's assistant for the second season in 2005. He also became a writer for the third and final season in 2006 when he co-wrote the episode Amateur Night with writer's assistant Nick Towne. Whedon and the writing staff were nominated for a Writers Guild of America Award for Outstanding Drama Series at the February 2007 ceremony for their work on the third season.
He also wrote and acted in an episode of Milch's next series John from Cincinnati.
Alongside his brothers Joss and Jed, he co-created and co-wrote the parody musical Dr. Horrible's Sing-Along Blog. Recently, he has worked on the FOX science-fiction series Fringe and the AMC drama Rubicon. The author lives in Los Angeles, CA..
or
Not Currently Available for Direct Purchase
Copyright © 2020 American Booksellers Association