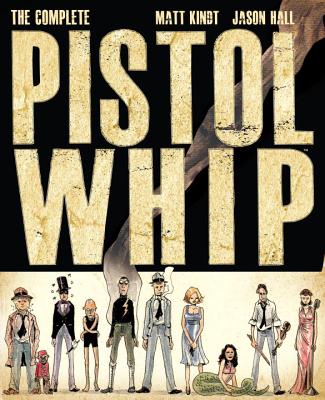 The breakout graphic novel series from MIND MGMT creator Matt Kindt and Beware the Creeper writer Jason Hall returns, in color for the first time and collected in its entirety! The edition includes both Pistolwhip books for the first time in hardcover, along with the Mephisto and the Empty Box one-shot and a story from Dark Horse Maverick: Happy Endings! Thrill to the twisty, interconnected tales of Mitch Pistolwhip, Charlie Minks, Jack Peril, Captain January, the Human Pretzel, and a monkey!

Matt Kindt was born in 1973 in St. Louis and currently resides in Webster Groves, Missouri. He worked in the local mini-comics scene from a young age, self-publishing his own copyshop zines since 1990. In 1995 he obtained a degree in art from Webster University in St. Louis. In 2001, Top Shelf Productions published his first full graphic novel, Pistolwhip. The book was critically well-received, nominated for the prestigious Harvey Award the next year and featured in Time Magazine's Top 10 list for Graphic Novels of 2001. He has written and illustrated the comics and graphic novels Mind MGMT, Revolver, 3 Story, Super Spy, and 2 Sisters, as well as Justice League of America (DC), Spider-Man (Marvel), and Unity (Valiant). He has been nominated for 4 Eisner and 6 Harvey Awards. His work has been published in French, Spanish, Italian, German and Korean. The author lives in Webster Groves, Missouri.
Loading...
or
Not Currently Available for Direct Purchase