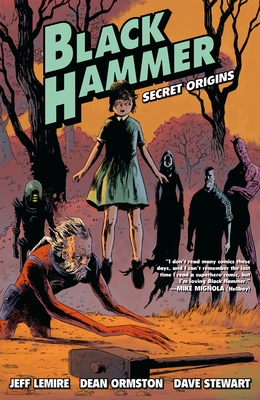 Once they were heroes, but the age of heroes has long since passed. Banished from existence by a multiversal crisis, the old champions of Spiral City--Abraham Slam, Golden Gail, Colonel Weird, Madame Dragonfly, and Barbalien--now lead simple lives in an idyllic, timeless farming village from which there is no escape! But as they employ all of their super abilities to free themselves from this strange purgatory, a mysterious stranger works to bring them back into action for one last adventure! Collects Black Hammer #1-#6.

“I don’t read many comics these days, and I can’t remember the last time I read a superhero comic, but I’m loving Black Hammer.” – Mike Mignola

New York Times Bestselling author, Jeff Lemire, is the creator of the acclaimed graphic novels Sweet Tooth, Essex County, The Underwater Welder and Trillium. His upcoming projects include the original graphic novel Roughneck from Simon and Schuster, as well as the sci-fi series Descender for Image Comics (with Dustin Nguyen) and Black Hammer for Dark Horse Comics (with Dean Ormston). Jeff has also written Green Arrow, Justice League and Animal Man for DC Comics and Hawkeye for Marvel Comics. In 2008 and in 2013 Jeff won the Schuster Award for Best Canadian Cartoonist. He has also received The Doug Wright Award for Best Emerging Talent and the American Library Association's prestigious Alex Award, recognizing books for adults with specific teen appeal. He has also been nominated for 8 Eisner awards, 7 Harvey Awards and 8 Shuster Awards. In 2010 Essex County was named as one of the five Essential Canadian Novels of the Decade. He currently lives and works in Toronto with his wife and son. The author lives in Toronto, ON., Canada.
Loading...
or support indie stores by buying on