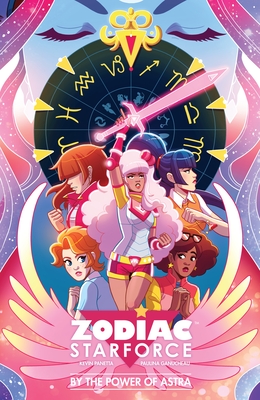 By the Power of Astra

They're an elite group of teenage girls with magical powers who have sworn to protect our planet against dark creatures . . . as long as they can get out of class! Known as the Zodiac Starforce, these high-school girls aren't just combating math tests. They're also battling monsters--not your typical afterschool activity! But when an evil force from another dimension infects team leader Emma, she must work with her team of magically powered friends to save herself--and the world--from the evil Diana and her mean-girl minions!

Kevin Panetta writes Zodiac Starforce. He has also written short stories for the Bravest Warriors comic book and
the educational anthology, Wild Ocean. Kevin lives in Washington, DC and is pretty sure he saw his house in the
new Captain America movie. You can find links to his other writing at: kevinpanetta.tumblr.com. The author lives in Washington, D.C..
Loading...
or support indie stores by buying on
(This book is on backorder)