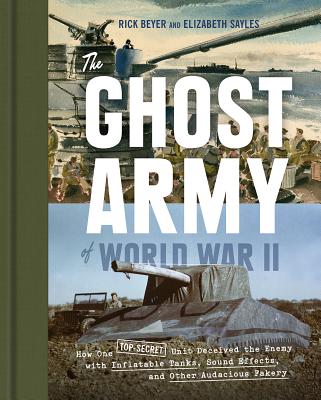 How One Top-Secret Unit Deceived the Enemy with Inflatable Tanks, Sound Effects, and Other Audacious Fakery

"A riveting tale told through personal accounts and sketches along the way—ultimately, a story of success against great odds. I enjoyed it enormously." —Tom Brokaw

The Ghost Army of World War II is the first book to tell the full story of how a traveling road show of artists wielding imagination, paint, and bravado saved thousands of American lives.

In the summer of 1944, a handpicked group of young GIs—including such future luminaries such as Bill Blass, Ellsworth Kelly, Arthur Singer, Victor Dowd, Art Kane, and Jack Masey—landed in France to conduct a secret mission. From Normandy to the Rhine, the 1,100 men of the 23rd Headquarters Special Troops, known as the Ghost Army, conjured up phony convoys, phantom divisions, and make-believe headquarters to fool the enemy about the strength and location of American units. Every move they made was top secret and their story was hushed up for decades after the war's end.

Hundreds of color and black and white photographs illuminate how their creations supported the war tactics that helped open the way for the final drive to Germany. The stunning art created between missions offers a glimpse of life behind the lines during World War II:

Praise For The Ghost Army of World War II: How One Top-Secret Unit Deceived the Enemy with Inflatable Tanks, Sound Effects, and Other Audacious Fakery…

"World War II was the greatest event in the history of mankind, and although it has been the subject of countless books, documentaries, and academic courses, there is so much still to know. The Ghost Army of World War II describes a perfect example of a little-known, highly imaginative, and daring maneuver that helped open the way for the final drive to Germany. It is a riveting tale told through personal accounts and sketches along the way-ultimately, a story of success against great odds. I enjoyed it enormously." - Tom Brokaw

"What a story! In 1944, an American unit of 1,100 artists, designers, and sound engineers, known as "The Ghost Army," snuck around France, using inflatable tanks, fake street signs, sound-effects records, and other tricks in order to deceive the German army into believing the Allies were somewhere they weren't. The book is full of drawings, paintings, and sketches by the men of the unit. In the end, it's a book about this weird (and successful!) project, but it's also a personal visual record of the last year of the war, executed by soldiers who had been selected for their artistic talent." -- Slate

"This book is a complete delight. An engaging account of the battlefield sleights of American GI artists during WWII, it is unprecedented in the breadth and detail of its telling. The suspense of its text is enlivened by a wealth of on-scene photographs, artists' sketchbooks, diaries, and other compelling first-person accounts. This is the eyewitness story of the Ghost Army as told by the artists who made it succeed." - Roy R. Behrens, author of False Colors: Art, Design and Modern Camouflage

"World War II history buffs will get a charge out of Rick Beyer and Elizabeth Sayles's The Ghost Army of World War II, about a top-secret group of GIs who in 1944 deployed rubber tanks, fake artillery and other decoys to distract and mislead the Germans in France. This little-known episode is recounted alongside photographs, memos, maps sketches and other memorabilia." - Newsday

"The Ghost Army of World War II is a veritable hive of fascinating information based on sound research. It's apparent that Rick Beyer and Elizabeth Sayles enjoy the subject with a level of dedication and passion that warms the hearts of irascible military historians such as me. I heartily recommend this book." - Martin King, author of Voices of the Bulge and The Tigers of Bastogne, consultant to the History Channel

"A fascinating read, and a fun one as well. Audacious is the right word for this daring sideshow that protected Patton's flank and other American soldiers. The original art is superb and frequently humorous. A well-crafted account of the amazing combination of shenanigans and tremendous courage that characterized the Twenty-Third Headquarters Special Troops." - Libby O'Connell, chief historian of the History Channel, author of The American Plate: A Culinary History in 100 Bites

"The Ghost Army is a unique book in many ways, which is little surprise given its subject; but perhaps the most striking thing about this tome is the fact that it can be enjoyed in two distinct ways. The hardcover book is large - it is of what one would call coffee table proportions, measuring about eight by ten inches - and about 240 pages long. Those pages are an almost even blend of captioned photographs, sketches, maps, graphics, and pure text. You could flip through The Ghost Army reading only the captions and looking at the pictures and be left with a decent understanding of what the unit did and who comprised its ranks. Alternately, you could read the prose without glancing at a single image and come away with a thorough grasp of who they were and what they did. But of course The Ghost Army is best enjoyed when every word is read and every image appreciated." - The Manual

Historian Rick Beyer is a best-selling author, award-winning filmmaker, and popular speaker. He wrote and directed the acclaimed documentary film The Ghost Army, which premiered on PBS in 2013.

Elizabeth Sayles is the award-winning, best-selling illustrator of more than twenty-five books for children. Her father, William Sayles, was a member of the Ghost Army, and she grew up listening to his war stories.
Loading...
or support indie stores by buying on