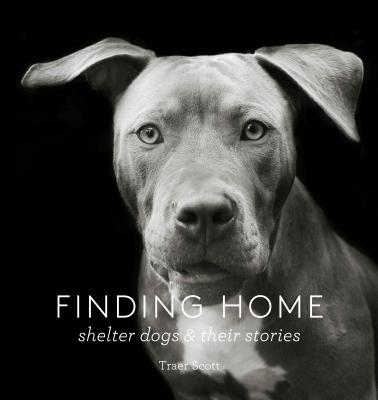 Shelter Dogs and Their Stories (A photographic tribute to rescue dogs)

Bold, retiring, serious, sparkling, quirky, or lovable—the dogs in Traer Scott's remarkable photographs regard us with humor, dignity, and an abundance of feeling. Scott began photographing these dogs in 2005 as a volunteer at animal shelters. Her first book, Shelter Dogs, was a runaway success, and in this follow-up, Scott introduces a new collection of canine subjects, each with indomitable character and spirit: Morrissey, a pit bull, who suffered from anxietyrelated behaviors brought on by shelter life until adopted by a family with four children; Chloe, a young chocolate Lab mix, surrendered to a shelter by a family with allergies; Gabriel and Cody, retired racing greyhounds; and Bingley, a dog who lost his hearing during a drug bust but was brought home by a loving family that has risen to the challenge of living with a deaf dog. Through extended features we become better acquainted with the personalities and life stories of selected dogs and watch as they experience the sometimes rocky and always emotional transition to new homes. The portraits in Finding Home form an eloquent plea for the urgent need for more adoptive families, as well as a tribute to dogs everywhere.

Praise For Finding Home: Shelter Dogs and Their Stories (A photographic tribute to rescue dogs)…

"Photographer Traer Scott follows up her groundbreaking book Shelter Dogs with a new work of equal grace and sensitivity. The portraits in Finding Home not only showcase a collection of canines with indomitable character and spirit, they are also an eloquent plea for more adoptive families, and a tribute to all dogs everywhere." - The Bark

"The dogs that stare out at readers from the pages of Scott's book are haunting. Scott also tells the stories of how each animal ended up in a shelter. Do yourself a favor. Read Finding Home, then go out and adopt a shelter dog." - Chicago Tribune

"Scott's black-and-white portraits give these dogs a poignancy and gravitas they deserve." -- Shelf Awareness

Traer Scott is an award-winning fine art and commercial photographer and the bestselling author of several books, including Nocturne, Shelter Dogs and Newborn Puppies (Chronicle Books, 2013). Her work has been featured in National Geographic, Life, Vogue, O, and dozens of other major national and international publications. Scott was the recipient of the 2010 Helen Woodward Humane Award for animal welfare activism. She resides in Providence, Rhode Island with her family and teaches animal photography at Rhode Island School of Design (RISD).
or support indie stores by buying on