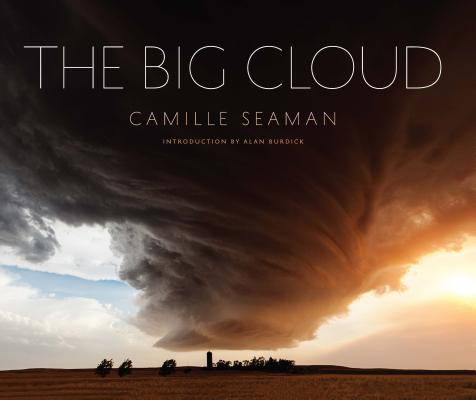 Witness the power of nature.

More than 85 thrilling photographs: These beautiful photographs of stormfronts, tornados, lightning storms, and pitch-black skies engulf the viewer's imagination and never fail to impart the awe-inspiring power of our constantly shifting weather and climate. Seaman's work is a potent reminder that there is no art more dramatic, in scale or emotion, than that created by nature.

"I wasn't born a storm chaser. Like so many things in my life it came out of left field, without a warning or sign." Camille Seaman is a TED Senior Fellow whose TED Talk on her photographs of supercell storms has garnered more than 1,600,000 views. She has received a National Geographic Award, and her photographs appear in publications including Time, The New York Times, and Men's Journal.

"A cloud can be beautiful, terrible, or both — the embodiment of the sublime."The Big Cloud features an introduction by Alan Burdick, author and science editor for The New Yorker.

If you liked Melting Away: A Ten Year Journey through Our Endangered Polar Regions, you'll love The Big Cloud

Praise For The Big Cloud: Specatular Photographs of Storm Clouds…

"A photographer captures dramatic images of supercell thunderstorms, tornadoes and other weather phenomena in a new book."
- The Wall Street Journal

"Equal parts terrifying and beautiful, gathering storm clouds force the reader to stop, look - and breathe - in a new book by photographer Camille Seaman. It's easy to imagine you are the one alone on the roads in June in Minnesota and across the Plains states, supercells swirling, contorting and swallowing the sky, a witness to nature's force. Seaman puts the reader squarely in her shoes. Some photos bear no description other than a timestamp of their month, year and state. With others, Seaman is spare with her words, describing the storm's structure or impact. Still, words never get in the way, allowing her photos to gather power, page to page."
- Minneapolis Star Tribune

"In total, Seaman spent seven years searching for gathering clouds in some of America's stormiest states: Nebraska, South Dakota, Kansas. Her photographs, now brought together in the new book The Big Cloud, are an spectacular document of nature's power. They show clouds thick and ominous, or funnel-shaped, hovering over a rural landscape or spiked with lightning."
- Atlas Obscura

"Captivating photographs of storm clouds by Camille Seaman show nature's power. From melting icebergs at both poles to stormy states across America, Seaman showcases the beauty, terror, and fragility of nature in her digital and film images."
- Colossal

"In her new book, "The Big Cloud," Seaman continues her exploration of nature by capturing the heavenly beauty and darkest dangers of these vast, constantly transforming bodies. Whether a half-mile-long wedge tornado, a fluffy cumulus field or multitiered shelf clouds, her subjects required an extreme amount of patience." - Los Angeles Times

"The Big Cloud" pulls back from the storms, effectively displaying the gigantic physics at work in the churning atmosphere; some of the best photos show the towering skies with tiny, seemingly insignificant homes far of in the distance. Seaman knows the buildings provide context for the vast forces up above."
-The Oklahoman

"Over the course of 176 pages, more than 100 of Seaman's photographs demonstrate the power of nature. Each storm has its own personality exemplified by the rich colors and amorphous shape of the clouds. Through her expert lens, each photograph appears as a landscape painting, literally showing the calm before the storm."
- My Modern Met

"The Big Cloud is a catalog of beautiful, ominous portraits of severe weather."
- Mental Floss

Camille Seaman is a TED Senior Fellow whose 2013 TED Talk on her photographs of supercell storms has garnered more than 1,500,000 views. Her previous book was Melting Away: A Ten-Year Journey through Our Endangered Polar Regions. She has received a National Geographic Award, and her photographs have appeared in publications including Time, the New York Times and Men's Journal.

Alan Burdick is staff writer at�The New Yorker, which he joined in 2012, first as a senior editor, then as the editor of Elements, their science-and-tech blog. His �first book, Out of Eden: An Odyssey of Ecological Invasion, was a National Book Award finalist and won the Overseas Press Club Award
Loading...
or support indie stores by buying on
(This book is on backorder)