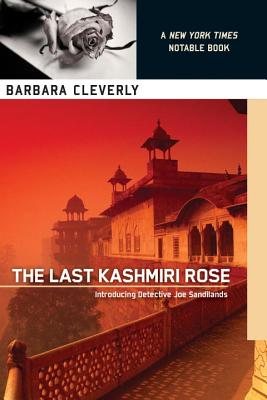 Barbara Cleverly's "New York Times "notable debut mystery, featuring Scotland Yard detective Joe Sandilands
Calcutta, 1922. In a land of saffron sunsets and blazing summer heat, an Englishwoman has been found dead, her wrists slit, her body floating in a bathtub of blood and water. But is it suicide or murder? The case falls to Scotland Yard inspector Joe Sandilands, who survived the horror of the Western Front and has endured six sultry months in English-ruled Calcutta. Sandilands is ordered to investigate and soon discovers that there have been other mysterious deaths, with sinister ties to the present case.
Now, as the sovereignty of Britain is in decline and an insurgent India is on the rise, Sandilands must navigate the treacherous corridors of political decorum to bring a cunning killer to justice, knowing the next victim is already marked to die.


Praise For The Last Kashmiri Rose…

"In her spellbinding debut mystery, The Last Kashmiri Rose, Barbara Cleverly evokes both the enchantments and the dangers of India during the convulsive later days of the Raj."—The New York Times Book Review

"Has just about everything: a fresh, beautifully realized exotic setting; a strong, confident protagonist; a poignant love story; and an exquisitely complex plot."—The Denver Post

Barbara Cleverly was born in the north of England and is a graduate of Durham University. A former teacher, she lives in Cambridge. She is the author of thirteen books in the Joe Sandilands series, including "The Last Kashmiri Rose," "Strange Images of Death," "The Blood Royal," "Not My Blood," " A Spider in the Cup," " Enter Pale Death," and "Diana s Altar.""
Loading...
or
Not Currently Available for Direct Purchase