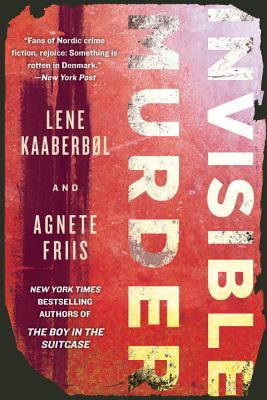 The second installment in the bestselling Danish crime series starring Red Cross nurse Nina Borg, following Fall 2011's "New York Times"-bestselling "The Boy in the Suitcase"
In the ruins of an abandoned Soviet military hospital in northern Hungary, two impoverished Roma boys are scavenging for old supplies or weapons to sell on the black market when they stumble upon something more valuable than they ever could have anticipated. The resulting chain of events threatens to blow the lives of a frightening number of people.
Meanwhile, in Denmark, Red Cross nurse Nina Borg puts her life and family on the line when she tries to treat a group of Hungarian Gypsies who are living illegally in a Copenhagen garage. What are they hiding, and what is making them so sick? Nina is about to learn how high the stakes are among the desperate and the deadly.

"Kaaberbøl and Friis return with a riveting follow-up to their 2011 debut, The Boy in the Suitcase....Nina and Sandor are flawed but appealing characters, and their stories smoothly connect in the buildup to a pulse-pounding finale. With its intricate plot and revealing glimpses into Roma life, this assured thriller cements its authors’ places near the top of the Scandinavian crime fiction pantheon."
—Library Journal, STARRED REVIEW

"Superb."
—The Globe and Mail

"Kaaberbøl and Friis describe this broken and terrifying world with the measured cadence of a network news anchor. From their report, civilization had a good run, but its lights are winking out.”
—The Baton Rouge Advocate

“Tense and twisty.”
—The Sacramento Bee

“This pair’s debut, The Boy in the Suitcase, grabbed me, and so did Invisible Murder.”
—The Charlotte Observer

“Kaaberbøl and Friis have created not only one of the best new crime series, but also one of the most unusual, in terms of the characters, the plots, and the way the crimes are integrated into the story.”
—International Noir Fiction

“Highly recommended for readers who want a novel that isn’t afraid to look unflinchingly, but not despairingly, at the world’s greatest social problems.”
—Criminal Element

"The authors do an excellent job with showing the radical divisions within Denmark. The book is suspenseful, the characters are often fascinating, and the plot is complex."
—Ted Hertel, Deadly Pleasures Mystery Magazine

"Invisible Murder will blow your mind.... It races towards an epic finish, an ending that leaves the reader both shocked and wonderfully satisfied. In the crowded world of Nordic crime, Invisible Murder rises above as a don’t-miss title."
—BookReporter

"Invisible Murder, the sequel to The Boy in the Suitcase, is a gripping thriller which sets the various narrative threads running before entwining them in a nail-biting race against time climax."
—EuroCrime

“A fascinating insight into current Danish culture.”
—Thinking About Books

Praise for The Boy in the Suitcase:

“Here’s something you don’t often see in Nordic noir fiction—a novel written by two women about the criminal mistreatment of women and children, compassionately told from a feminine perspective and featuring female characters you can believe in.... The first collaborative effort of Lene Kaaberbol and Agnete Friis, and it packs an almighty punch.”
—The New York Times Book Review

“Terrific.... What’s for sure is that, once you start reading, you can’t stop—it’s as if the poor kid’s life depends on your getting to the end as fast as possible.”
—Washington Post

“Suitcase is a frightening and tautly told story of the lengths to which people will go for family and money.”
—USA Today

“Boy is first-rate thriller.... Fans of crime fiction and suspense will want to nab it. I just want to know when the next book is set for release.”
—Associated Press

“There are many twists, none gratuitous. This is a great beginning.... A series to watch.” —Globe and Mail

“Warning! If you open this book, your life will be on stand-by.”
—Elle (Denmark)

“Extraordinary.... A crime novel where everything is perfectly done.”
—The Weekend Newspaper (Denmark)

Lene Kaaberbol and Agnete Friis are the Danish duo behind the Nina Borg series. Friis is a journalist by training, while Kaaberbol has been a professional writer since the age of 15, with more than 2 million books sold worldwide. Their first collaboration, "The Boy in the Suitcase," was a "New York Times "and "USA Today "bestseller, and has been translated into 27 languages."
Loading...
or
Not Currently Available for Direct Purchase