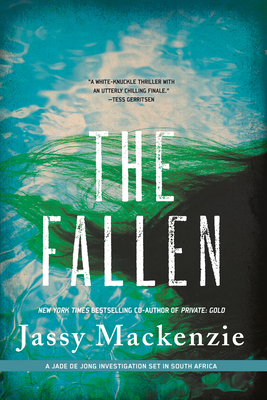 When P.I. Jade de Jong invites Superintendent David Patel on a scuba diving holiday in St. Lucia, she hopes the time away will rebuild their conflicted relationship. Jade’s dreams are soon shattered when David calls off their affair, forcing her into the arms of environmentalist Craig Niewoudt. But the next morning, romantic issues are put aside when a scuba diving instructor, Amanda Bolton, is found brutally stabbed to death.

Amanda is a most unlikely candidate for murder—a quiet and intelligent woman who until a few months ago pursued a high-powered career as an air traffic controller. She had few acquaintances and no lovers. The only loose end is a postcard in her room from Jo’burg-based Themba Msamaya, asking how she is doing “after 813 and The Fallen.” Jade and David put their differences aside and start the deadly hunt.

Praise For The Fallen (A PI Jade de Jong Novel #3)…

“A white-knuckle thriller with an utterly chilling finale.”—Tess Gerritsen

Jassy Mackenzie was born in Rhodesia and moved to South Africa when she was eight years old. She lives in Kyalami near Johannesburg and edits and writes for the annual publication Best of South Africa. She is the author of three novels in the Jade de Jong series.
Loading...
or
Not Currently Available for Direct Purchase