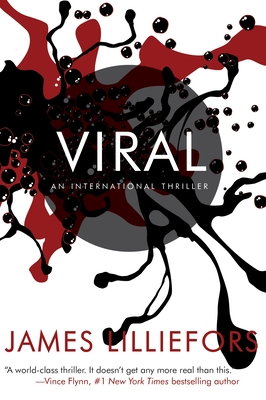 In remote pockets of the Third World, a deadly virus is quietly sweeping through impoverished farming villages and shanty towns with frightening speed and potency. Meanwhile, in Washington, a three-word message left in a safe-deposit box may be the key to stopping the crisis—if, that is, Charles Mallory, a private intelligence contractor and former CIA operative, can decipher the puzzle before time runs out.

What Mallory begins to discover are the traces of a secret war, with a bold objective—to create a new, technologically advanced society. With the help of his brother Jon, an investigative reporter, can he break the story to the world before it is too late—before a planned “humane depopulation” takes place?

As the stakes and strategies of this secret war become more evident, the Mallory brothers find themselves in a complex game of wits with an enemy they can’t see: a new sort of superpower led by a brilliant, elusive tactician who believes that ends justify means.

"Lilliefors' debut thriller doesn't slow down until the last page.... This one will keep you up at night." -Romantic Times (4 ½ star review)

"Lilliefors provides enough twists to keep the pages turning. He also manages to develop and humanize his characters including some of the villains." -Gumshoe Review

"[T]his cautionary tale can make your blood run cold.... Lilliefors is an author to watch." -Crimespace

"Delivers the goods. The international setting. The spies. The unscrupulous, powerful bad guy(s). A sprinkle of romance, a spine shuddering genetically engineered disease, and a mystery that kept me guessing into the final pages." -Poptimal

“An ambitious thriller; its villains, no ordinary terrorists, are determined to create a new world (even if it means wiping out a large portion of its population). Solidly plotted and featuring a unique pair of protagonists—you don’t often find a team of brothers as action heroes—the book is sure to appeal to fans of thrillers with Big Ideas and capital-V villains. A sequel is in the works, which is a good thing: readers will leave the book wanting to see more of Charles and Jon.” —Booklist

“Fans of intelligently written page-turners will be rewarded.” —Publishers Weekly

“Software billionaires, media moguls, government henchmen, and a beautiful bio-chem warfare expert enter and exit the story in a whirl of action with all of it leading to a suspenseful race to stop a crime, the magnitude of which is off the scale.” —Suspense Magazine

“Viral is a world-class thriller. It doesn’t get any more real than this. Lilliefors has created one of the most compelling novels of international espionage I’ve come across in a long time.”—Vince Flynn, #1 New York Times bestselling author

“A crackling good story, so realistic that it's scary. Lilliefors is right up there with the best thriller writers.”—Ben Bova, six-time Hugo Award–winning author of the Grand Tour series.

“Viral weaves genetics, nanotechnology and robotics into a complex tapestry of international geopolitics and nails the details. Lilliefors' debut is brilliant, with realistic science, tight pacing, and believable characters in a gripping story of the audacity of dehumanized science.”—Jeffrey Anderson, MD PhD, international bestselling author of Sleeper Cell and Implant

“James Lilliefors, a brand new thriller writer on the scene, has opened with a bang with his first novel, Viral.   With the Mallory brothers, Charles and Jon, the insanity that Jim has brilliantly portrayed becomes all too sharply urgent, and certainly timely.  Hats off!”—David Hagberg, New York Times bestelling author of The Expediter

“Viral is a great read that made me wonder if the author has a secret past life in the dark world of intelligence.... Lilliefors' powerful novel could be both a prediction and a warning of tomorrow's headlines.”—Wes DeMott, former FBI agent, author of The Fund, Heat Sync, and Walking K

“An adrenaline-pumping tale of terror that simmers with intrigue and tension. From the very first page, Lilliefors masterfully takes us on a nail-biting journey into the terrifying world of bioterrorism.”—Gary Birken, MD, author of Embolus and Code 15

James Lilliefors is an award-winning journalist and former newspaper editor who has written for The Washington Post, The Boston Globe, The Baltimore Sun, The Miami Herald and elsewhere. He was raised in the Washington, D.C. area and studied at the University of Iowa and the University of Virginia, where he was a Henry Hoyns Fiction Writing Fellow. He currently lives in Florida and is at work on the follow-up to Viral.