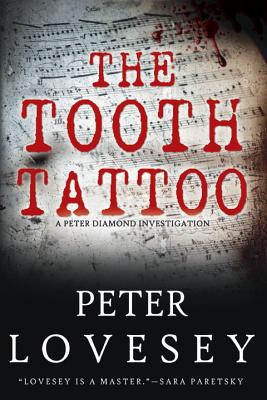 Peter Diamond, head of the Criminal Investigation Division in scenic Bath, England, is investigating the murder of a young woman whose body has been found in the canal, the only clue to her identity a tattoo of a music note on one of her teeth. For Diamond, who wouldn't know a Stradivarius from a French horn, the investigation is his most demanding ever.
Meanwhile, strange things are happening to jobbing violist Mel Farran, who finds himself scouted by a very elite classical quartet--one whose previous violist disappeared without a trace. Despite the mystery shrouding the group, the chance to join is too good to pass up, and Mel finds himself in a cushy residency at Bath Spa University with the quartet--and embroiled in the unusually musical murder investigation. As the story unfolds in fugue-like counterpoint, Peter and Mel both learn frightening secrets about fandom and about what it takes to survive in the cutthroat world of professional musicians.
Peter Lovesey has been hailed by the critics as "superlative," "a master of the genre," "never puts a foot wrong" and the Peter Diamond series as "one of the most enjoyable police series around." This new case for the much-loved detective will bring new praise and much satisfaction for his legions of fans.


Praise For The Tooth Tattoo…

Praise for The Tooth Tattoo

"These erudite and wondrously witty books are unlike any police procedural you've ever read. THE TOOTH TATTOO is a case in point.... The murder investigation provides the structural framework for a group portrait of the eccentric members of this captivating ensemble and the music they play with such rapturous devotion."
—Marilyn Stasio, The New York Times Book Review

"Ingenious .... Lovers of good music and a good mystery should not miss this delightful tale."
—Washington Post Book World

"A particularly crafty resolution of the enigmatic mystery shows that this long-running series still has plenty of life."
—Publishers Weekly, STARRED REVIEW

“Identifying the culprit takes something of a back seat to descriptions of the quartet and the difficult music its members play.... The insights into the personal dynamics of a string quartet are fascinating.
—PG Koch, The Houston Chronicle

"Lovesey is a puzzle master, and readers will happily chase his adroitly placed clues.... But Lovesey’s knowledge of classical music and his skill in describing it make 'The Tooth Tattoo' especially memorable and informative."
—Richmond Times-Dispatch

“Lovesey is the real deal .... [The Diamond novels] are deftly plotted, with strong characters and a good dollop of dry humor, especially the (generally) good-natured sniping among the members of his team.”
—The Seattle Times

"The old master does not disappoint. The Tooth Tattoo is a bravura performance." —Reviewing the Evidence

“I won’t string you along.  I won’t be Haydn my feelings about the book, which I did enjoy very much.  So just fugue-et about them and appreciate another entertaining Peter Diamond novel.”
—Ted Hertel, Deadly Pleasures

Praise for the Peter Diamond series

"Lovesey is a master."
—Sara Paretsky

"A bravura performance from a veteran showman."
—The New York Times Book Review

Peter Lovesey is the author of more than thirty highly praised mystery novels. He has been awarded the CWA Gold and Silver Daggers, the Cartier Diamond Dagger for Lifetime Achievement, the"Strand Magazine"Award for Lifetime Achievement, the Macavity, Barry, and Anthony Awards, and many other honors. He lives in West Sussex, England."
Loading...
or
Not Currently Available for Direct Purchase