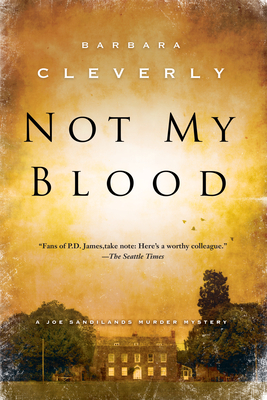 Not My Blood (A Detective Joe Sandilands Novel #10)

Scotland Yard Detective Joe Sandilands is caught off guard one night in 1933 by a phone call from a distressed boy named Jackie Drummond, who just might be the illegitimate son Joe never knew he had. Jackie is in trouble at his Sussex boarding school, where a teacher has been murdered. When Joe gets himself assigned to the investigation, he learns the boarding school case is more complicated than it appears: A frightening number of boys, all from wealthy families, have gone missing over the school’s history, and by some coincidence none of the families have followed up on their sons' whereabouts.

Praise For Not My Blood (A Detective Joe Sandilands Novel #10)…

Praise for Not My Blood

“Cleverly is a terrific writer, and she’s also wonderful at setting a scene. Fans know that she supplies the glamour as well as the grime, and she’s one of the most adept puzzle-plot-makers now working. The clues are all there. But you won’t guess who it is until she gives you the final word.”
—The Globe and Mail

“As usual, Cleverly neatly captures the style and feeling of the period between the world wars and provides plenty of mystery, suspense and danger.”
—Kirkus Reviews

"Barbara Cleverly lives up to her surname with her intricate, erudite and witty books about Scotland Yard detective Joe Sandilands.... Cleverly is a terrific plotter, and her prose highlights a keen sense of place, character and dialogue.... Adding to the pleasure are Cleverly's unpretentious references to literary classics. Fans of P.D. James, take note: Here's a worthy colleague."
—Seattle Times

Praise for the Joe Sandilands Series

Barbara Cleverly, a former teacher, now lives in Cambridge. Her Joe Sandilands series, including The Last Kashmiri Rose, Folly du Jour and Strange Images of Death, which is set against the backdrop of the Indian Empire, was inspired by the contents of a battered old tin trunk that she found in her attic.
Loading...
or
Not Currently Available for Direct Purchase