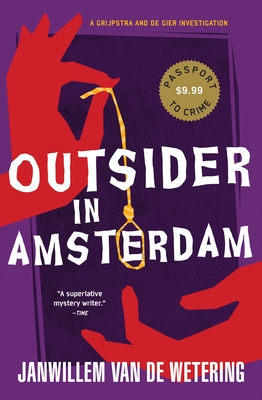 "[Van de Wetering] is doing what Simenon might have done if Albert Camus had sublet his skull." —John Leonard

On a quiet street in downtown Amsterdam, a man is found hanging from the ceiling beam of his bedroom, upstairs from the new religious society he founded: a group that calls itself “Hindist” and supposedly mixes elements of various Eastern traditions. Detective-Adjutant Gripstra and Sergeant de Gier of the Amsterdam police are sent to investigate what looks like a simple suicide, but they are immediately suspicious of the circumstances.

This now-classic novel, first published in 1975, introduces Janwillem van de Wetering’s lovable Amsterdam cop duo of portly, wise Gripstra and handsome, contemplative de Gier. With its unvarnished depiction of the legacy of Dutch colonialism and the darker facets of Amsterdam’s free drug culture, this excellent procedural asks the question of whether a murder may ever be justly committed.

"Mr. Van de Wetering's policemen are just as likely to . . . marvel at human nature as to shoot it down."
—The New York Times

"[Van de Wetering] is doing what Simenon might have done if Albert Camus had sublet his skull."
—John Leonard

Janwillem van de Wetering (1931–2008) was born and raised in Rotterdam, but lived most recently in Surry, Maine. He served as a member of the Amsterdam Special Constabulary and was once a Zen Buddhist monk. He is renowned for his detective fiction, including Outsider in Amsterdam; The Corpse on the Dike; the short story collection The Sergeant’s Cat; The Maine Massacre, which garnered him the Grand Prix de Littérature Policière; and ten other books in the Amsterdam Cops series.
Loading...
or support indie stores by buying on