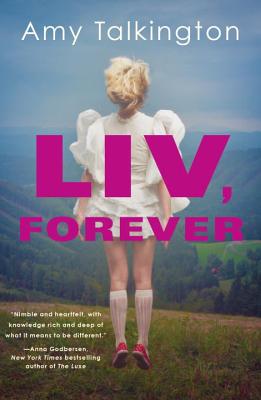 When Liv Bloom lands an art scholarship at Wickham Hall, she’s thrilled. The school’s traditions and rituals may be a little strange, but for the first time ever she has her own studio, supplies—everything she could want. Including Malcolm Astor, a legacy student with his own art obsession. Liv’s defenses melt, despite warnings from fellow scholarship kid Gabe Nichols not to get involved with Malcom.

But her bliss is doomed; weeks after arriving, Liv is viciously murdered. Gabe, the only one who can see her, is now her sole link to the world of the living. Together, Liv, Gabe, and Malcolm fight to expose the terrible truth that haunts the halls of Wickham.

“A passionate love story with an intelligent sense of humor . . . A must-read.”
—Marti Noxon, producer/writer on Buffy the Vampire Slayer, Glee, and I Am Number Four

“It’s romantic, it’s gruesome and you won’t want it to end. Two severed thumbs up.”
—Kendare Blake, author of Anna Dressed in Blood and Antigoddess

“Nimble and heartfelt, with knowledge rich and deep of what it means to be different.”
—Anna Godbersen, New York Times bestselling author of The Luxe

"Amy Talkington paints an unforgettable tale that is both spine-chilling and heartwarming. Readers will die for Liv."
—Tonya Hurley, New York Times bestselling author of the Ghost Girl series

“A privileged boarding school setting, a sinister secret society, and a sweet romance that transcends even death . . . A pitch-perfect paranormal.”
—Justine Magazine

“[Liv’s death] should come as no surprise—and yet, somehow, it does . . . The story, a romance meets ghost story meets mystery, is well written and authentic.”
—Cleveland Plain Dealer

"This quirky love story will appeal to teens who enjoy a good ghost story."
—VOYA Magazine

“[Liv, Forever’s] gothic feel is what sets it apart from other boarding school stories, in addition of course, to the mystery at its heart . . . A ghost story, a love story, and a tragedy.”
—BookTrib

"An interesting mix of paranormal fiction, mystery, and romance . . . Liv is a likable outsider whose lack of understanding of [Wickham Hall’s] traditions should resonate with readers who’ve ever felt like they don’t quite fit in.”
—School Library Journal

“A smart and emotionally affecting detective story . . . A must-read for anyone looking for a smart paranormal thriller with emotional depth.”
—Reviewing the Evidence

"A ghost story overflowing with a creepy school, a mysterious society, and a love that just seems impossible . . . Liv, Forever is an extremely hard book to put down."
—Fresh Fiction

“A spooky conspiracy and a prestigious boarding school. It's elementary, dear readers, why this is a match made in heaven . . . Somebody set up the Ouija Board and bust out the candles.”
—Forever YA

"Liv, Forever delivers gothic romance with Joss Whedon-esque delight. A meta-ghost story that will keep your blood chilled through the very last page!"
—Lex Hrabe, co-author of the Quarantine series

"Liv and Malcolm are the ultimate star-crossed artists—bound by a love of Banksy and Bon Iver, but separated by death."
—Jill Greenberg, fine artist and celebrity photographer

“Does a great job of expressing what it’s like to be different through her various characters, while reminding us that things—and people—are not always what they seem . . . A wonderful read.”
—Crimespree Magazine

Amy Talkington is an award-winning screenwriter and director living in Los Angeles. Before all that she wrote about music for magazines like Spin, Ray Gun, Interview, and Seventeen (mostly just as a way to get to hang out with rock stars). As a teenager in Dallas, Texas, Amy painted lots of angsty self-portraits, listened to The Velvet Underground and was difficult enough that her parents finally let her go to boarding school on the East Coast. Liv, Forever is her first novel.
Loading...
or
Not Currently Available for Direct Purchase