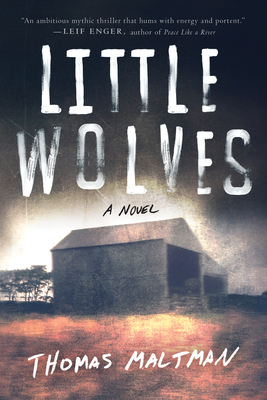 A tragic act of violence echoes through a small Minnesota town

Set on the Minnesota prairie in the late 1980s during a drought season that’s pushing family farms to the brink, Little Wolves features the intertwining stories of a father searching for answers after his son commits a heinous murder, and a pastor’s wife (and washed-out scholar of early Anglo-Saxon literature) who has returned to the town for mysterious reasons of her own. A penetrating look at small-town America from the award-winning author of The Night Birds, Little Wolves weaves together elements of folklore and Norse mythology while being driven by a powerful murder mystery; a page-turning literary triumph.

An INDIE NEXT Selection

"Here’s one I’ll recommend—Tom Maltman’s written an ambitious mythic thriller that hums with energy and portent. Set under brooding prairie skies, Little Wolves has modern psychoses and generational wickedness, ravening devils and uneasy saints. It shifts and dodges like wind, and it rings with conviction and confidence. What more can a reader ask?"
—Leif Enger, author of Peace Like a River

“Satisfying on so many levels . . . heartbreakingly real. This unpretentious tale of life in rural Minnesota is writing at its finest.”
—William Kent Krueger, New York Times bestseller and winner of the Edgar award

“Took my breath away . . . as rich in myth and metaphors as Cormac McCarthy's The Road.”
—Milwaukee Journal-Sentinel

“At its heart, Little Wolves is a powerful mystery . . . Maltman combines mythology and small-town claustrophobia to show how the roots of the violence [are] planted.”
—Christian Science Monitor

"A complicated portrait of a prairie town, a meditation on violence, a fantasia of myth and folklore, and a knockout murder mystery, Little Wolves is haunting, at times terrifying, a gothic cousin to Kent Haruf's Plainsong. I loved this book."
—Benjamin Percy, author of Red Moon

"A work of nuance, craft, and tightly plotted narrative . . . Little Wolves is a portrait of two individuals seeking solace through religion and the law, and finding every opportunity thwarted by that most central tenet of Americana: nostalgia."
—Rain Taxi

"A powerful mix of tragedy, myth, psychological thriller, and discovery told in a style so engaging that the reader might easily get caught up in the beauty of the words if the story itself were not so stunning."
—Library Journal Starred Review

"A masterwork of fiction. Not just a good book that’s interesting on multiple levels, but a great book that will stand the test of time . . . I was completely spellbound. Add to this the mysteries surrounding the town and characters, and I felt, often, as though I were reading some contemporary version of Dostoyevsky."
—Peter Geye, author of Safe From The Sea

"Little Wolves weaves the lives of a father, a son, a pastor’s wife, and a community in this compelling mystery of murder and secrets. His brilliant use of historical and mythical elements are combined with everyday life in ways that are hair-raising and true. Maltman has a gift for framing unforgettable characters. Everything about this book asks us to examine life more closely."
—Elizabeth Cox, Author of The Slow Moon

"This novel churns with the tension of a building prairie thunderstorm. Tom Maltman knows that dark truths can be hidden under open skies, and he knows the secrets of the bloodstained ax in the barn."
—John Reimringer, author of Vestments

"The poetry of this prose and the suspense of the plot, along with the intensity of characterization will have many readers comparing Thomas Maltman to Cormac McCarthy—that greatest of compliments—for very good reason. This novel is a work of high art by the real thing."
—Laura Kasischke, author of Space, in Chains and The Life Before Her Eyes

"Absolutely fantastic. Unnerving, gorgeously written . . . The writing is haunting.”
—Caroline Leavitt, author of Pictures of You

“Maltman makes his leading characters so sensitive that you may shudder at the same revelations that so appall them.”
—Kirkus

“Little Wolves is beautifully written, both in the style of prose and pacing of the narrative.”
—Grand Rapids Herald-Review

“Maltman expertly weaves a narrow thread of mysticism into the story . . . Thomas Maltman is a master wordsmith and storyteller. He seasons this story with the perfect amount of every ingredient. There is literally never a dull moment in this book.”
—Coastal Breeze News

"In gorgeous prose, Maltman conjures both the irrational suspicion and the heartwarming connections forged in a small town during times of trauma."
—Booklist

“Little Wolves is reminiscent of Kent Haruf’s Plainsong, but grittier . . . a great read with loads of literary merit."
—BookSquawk

“[Maltman] hit the ground running with Night Birds and has now given us another award-worthy novel . . . You will be drawn into the intriguing murder plot, of course, but you will also be captivated by Maltman's lyrical prose, adept storytelling, and artistic rendering of the moody Midwestern prairie of the 1980s. Maltman has done for the Midwest what Steinbeck did for the Salinas Valley.”
—Bev Denor, LaDeDa Book

“Maltman's prose is vivid and evocative, rendering place and event in striking images . . . This is a novel to be shared and savored, fiction at its finest, infused with tragedy and truth.”
—Curled Up with a Good Book (blog)

“With Little Wolves, Maltman weaves a beautiful, bewildering cloth . . . We care enough to circle these stranded questions hours, days, even weeks after we have closed the book.”
—Flyway (blog)

Praise for The Night Birds

"We all set our sights on the Great American Novel . . . [Thomas Maltman] comes impressively close to laying his hands on the grail."
—Madison Smartt Bell, Boston Globe

Thomas Maltman's essays, poetry, and fiction have been published in many literary journals. He has an MFA from Minnesota State University, Mankato and he lives in the Twin Cities. His first novel, The Night Birds, won several national awards, including an Alex Award, a Spur Award, and the Friends of American
Writers Literary Award. In 2009 the American Library Association chose The Night Birds as an "Outstanding Book for the College Bound."
Loading...
or
Not Currently Available for Direct Purchase