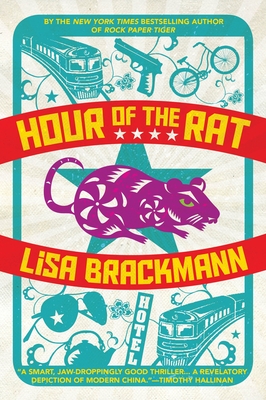 Hour of the Rat (An Ellie McEnroe Novel #2)

Iraq War vet Ellie McEnroe has a pretty good life in Beijing, representing the work of controversial dissident Chinese artist Zhang Jianli. Even though Zhang's mysterious disappearance has attracted the attention of the Chinese authorities. Even though her Born-Again mother has come for a visit and shows no signs of leaving.

But things really get complicated when Ellie's agrees to help out an old Army buddy with his search for his missing brother. Ellie finds herself entangled in a conspiracy that may or may not involve a sinister biotech company, eco-terrorists, an art-obsessed Chinese billionaire, and lots of cats—a conspiracy that will take her on a wild chase through some of China's most beautiful and most surreal places.

Praise For Hour of the Rat (An Ellie McEnroe Novel #2)…

Praise for HOUR OF THE RAT

“A smart, jaw-droppingly good thriller, often hilarious, set in a revelatory depiction of modern China. Hour of the Rat should make Lisa Brackmann a star.”
—Timothy Hallinan, author of the Junior Bender series

"A rocking sequel.... [Ellie McEnroe's] motives, her dogged determination, and her burning sense of moral outrage will be familiar to anyone who's ever read Chandler's The Long Goodbye... Brackmann captures it all with an unflinching honesty and frank sense of moral unease that strips bare the romance myths of the 'New China'—and of the old capitalism running amuck."
—Mystery Scene

“A totally genius novel: smart, funny, dark, hip... exquisite. She had me in a choke-hold of utter happy reading splendor from, literally, the first sentence, and never let up. Also, I think I could hang with Ellie McEnroe forever. Definitely the woman I want along on my next wild jaunt across Asia.”
—Cornelia Read, author of the Madeline Dare series

"If you’re shopping for someone who enjoyed Stieg Larsson’s Lisbeth Salander books and is looking for something new to read, pick up the two Ellie McEnroe mysteries by Lisa Brackmann,Rock Paper Tiger and Hour of the Rat.... the combination of a strong female protagonist, a Chinese setting, and engrossing mystery plots results in books that I think any grown-up fan of Nancy Drew would enjoy finding in her Christmas stocking."
—Los Angeles Review of Books

“China’s a big country, and as the foul-mouthed, pill-popping vet travels from tourist trap to toxic wasteland and back, her journey becomes one of disenchantment, frustration and anger.... this book—and the fingers it points—matter.”
—January Magazine, Best Books of 2013

"Imbued with vivid detail about contemporary China."
—Time Out Beijing

“Modern China, with all its beauty and blemishes, comes alive as the story unfolds. Ellie pops her pain pills, drinks her beer, offers wry observations, and follows clues from one city to another across vast, cipherlike China... Beautiful lakes lie under magical mountains at one stop. Revolting rivers of sludge foul the air at another.... [Hour of the Rat] features an enjoyably profane protagonist and is peopled with characters who will take up residence in the reader’s mind, setting up an itch that can only be satisfied by another novel from this author.”
—Suspense Magazine

“A finely honed thriller.... Brackmann is as adept at bringing China’s densely populated cities and breathtaking landscapes to life as she is at depicting her flawed but appealing characters and twists and turns galore.”
—Publishers Weekly

“One of the best thrillers of the year.... Brackmann has topped off a perfect, darkly humorous, hip novel and gone one better by writing dialog that is Chandleresque yet thug modern. She has set the bar high for anyone wishing to write at the top of their game in the noir genre.”
—Seattle Post-Intelligencer

“This mystery-thriller set among China's expat community is both a fascinating character study and a transportation in place. Brackmann's descriptions of China make me feel like I've been there. Plus, Ellie says what all of us are thinking. Love her!”
—Huffington Post

"[Brackmann] somehow manages to weave together a perfectly logical story with Uigar dissidents, a subversive online game, and the Chinese art world, without ever bogging down in explication. There aren’t many writers who could pull all that off, maintain suspense, and be funny, too."
—Long Beach Gazette

“Brackmann's crime fiction is exhilarating and compelling, and I had no regrets about trading in my preconceptions about China, to absorb both the current issues and the clear passion that Ellie has for the place and its diversity.”
—Beth Kanell, Owner, Kingdom Books

“One part China travelogue, two parts mystery, and a healthy dose of quirky charm. This is a perfect summer read for those looking for a mystery that’s off the beaten path!”
—My Bookish Ways

Lisa Brackmann has worked as a motion picture executive and an issues researcher in a presidential campaign. A southern California native, she currently lives in Venice, California. Her critically acclaimed debut novel, Rock Paper Tiger, was an Amazon Best Book of 2010.