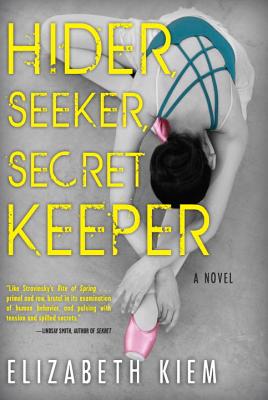 Lana Dukovskaya is an up and coming talent at the Bolshoi Ballet, where her mother, Marina, also danced until her career came to a mysterious end. On the eve of an international tour, Lana’s best friend and chief rival is brutally attacked, making Lana both the substitute soloist and the prime suspect.

Once in New York, Lana meets Georgi Levshik, a powerful Russian émigré who claims to know the truth about her mother’s past. Lana is wary, torn between curiosity and distrust. But when another young dancer is struck down just hours before her debut, Lana knows she is in danger. On the run, Lana puts her trust in Levshik’s alluring bodyguard, Roma. Together they must uncover the truth about a blood feud involving three generations of Dukovskaya dancers.

"Even though the dancers have come to New York, [in Hider, Seeker, Secret Keeper] the book is still steeped in Russian culture. This is a novel full of plot twists and turns that help uncover the lies, the betrayals, and the resentment of generations."
—VOYA

"Infused with a grim urgency, both cold and vividly alive . . . Those looking for the thrill of a wrongly accused heroine, infused with the passion of a dancer’s dedication to her craft, will enjoy this taut mystery."
—Booklist

"A smart, tough thriller with an all-too-timely topic . . . Lana is a persuasive heroine; jaded, mature, and self-reliant. She has few illusions about the world in which she operates."
—School Library Journal

"Like Stravinsky’s Rite of Spring, Elizabeth Kiem’s tale of ballerinas and bratva is primal and raw, brutal in its examination of human behavior, and pulsing with tension and spilled secrets. But Hider, Seeker, Secret Keeper is also brimming with grace—the perfect-posture elegance of complex characters who are haunted by their pasts and tradition as they try to emerge into modernity. Kiem’s detailed knowledge of Russian language and culture adds just the right amount of authenticity to a thrilling adventure."
—Lindsay Smith, author of Sekret

“This is a hair raising tale of lost illusions and self-discovery. It was almost disturbing how much I recognized Lana and her personal heartbreak. A look behind the curtains at the dangers and obstacles of ambition for the dancer in Russia today.”
—Joy Womack, principal ballerina, Kremlin Ballet

“Dancer, Daughter, Traitor, Spy culminates in a tangle of bad guys and intrigue . . . [Evokes] the bleakness and nostalgic charms of the early 1980s [in Russia]. The results are enjoyably escapist. For [readers] enamored with the Russia of literature and film, who want something slightly more contemporary.”
—The New York Times

"Terrifying . . . Historical fiction meets spy thriller, Dancer, Daughter, Traitor, Spy is sure to keep you on the edge of your seat."
—Dance Spirit Magazine

“In a world where nothing makes sense, what is sanity? . . . This atmospheric, suspenseful story is one of devotion and deception,  innocence and independence, friendship and love, music and dance, immigration and coming of age.”
—Booklist, Starred Review

"Sophisticated storytelling with complex characterization and details that provide color and texture . . . A compelling portrait of a young woman on the verge of adulthood, caught up in the domestic secrets of her parents and the enmity of two countries."
—Kirkus Reviews

"Dancer, Daughter, Traitor, Spy has it all: love, death, ballet, and pop music during the Cold War '80s. A romantic, suspenseful, and gracefully written novel."
—Natalie Standiford, author of How to Say Goodbye in Robot and Confessions of the Sullivan Sisters

"Fascinating . . . The twists and turns, as Marina tries to decide whom she can really trust, keep readers guessing right up to the end, just as a good spy novel should."
—School Library Journal

Elizabeth Kiem studied Russian language and literature at Columbia University and lived in Russia immediately after the collapse of the Soviet Union. Her nonfiction work can be read all over the world wide web. She is also the author of two other books in the Bolshoi Saga: Dancer, Daughter, Traitor, Spy and Orphan, Agent, Prima, Pawn. She lives in London.
Loading...
or
Not Currently Available for Direct Purchase