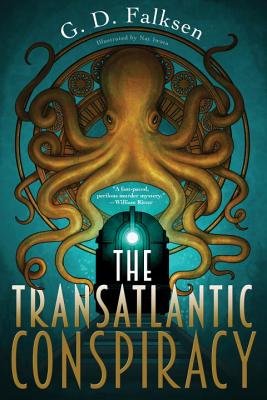 At the dawn of a reimagined 20th century, one girl must become the reluctant symbol of a new world.

The year is 1908. Seventeen-year-old Rosalind Wallace’s blissful stay in England with her best friend, Cecily de Vere, ends abruptly when her father books Rosalind on the maiden voyage of his fabulous Transatlantic Express, the world’s first railroad to travel under the sea. Rosalind is furious. But lucky for her, Cecily and her handsome older brother, Charles, volunteer to accompany her home.

But when Charles disappears and Cecily and her housemaid, Doris, are found stabbed to death in their state room, Rosalind finds herself trapped undersea, in a deadly fight to clear herself of her friend’s murder and to thwart a sinister enemy.

Praise For The Transatlantic Conspiracy…

Praise for The Transatlantic Conspiracy

"[An] Agatha Christie–esque mystery . . . Fantastical alternate history details blend seamlessly with multifaceted characters and tightly woven elements of intrigue, suspense, and romance to create a story, and a world, that will long linger in readers’ imaginations."
—Publishers Weekly, Starred Review

"[The Transatlantic Conspiracy] has everything; political intrigue, class warfare, tech upheaval, spies, murder, a smattering of romance. A page-turner for sure."
—FreshFiction.com

"An undersea Murder on the Orient Express . . . A frenetic thrill ride of plots and counterplots, daring escapes, [and] grand gestures."
—Kirkus Reviews

"[Rosalinsd's] sleuthing provides twists and turns that keep everyone fully involved in this pre-World War I steampunk adventure. The balance of romance and espionage is sure to keep all readers interested."
—School Library Connection

"The underwater train is described in glorious detail; its dining car, library, and staterooms evoke unwelcome comparisons to the Titanic."
—VOYA

“What starts as a diverting steam-powered jaunt for two affluent young ladies takes a sharp turn into a fast-paced, perilous murder mystery. The Transatlantic Conspiracy excites and electrifies and pulls the impossible past just a little closer.”
—William Ritter, bestselling author of Jackaby

"Rosalind is a nice mix of American can-do attitude (with a dash of steampunk ingenuity) and nonconformist teen girl... death, intrigue, and cool machinery in a zippy, steampunk-friendly read."
—Bulletin of the Center for Children's Books

G. D. Falksen is an author, lecturer, and student of history. He has consulted for Disney, and is a voice actor for and co-writer of the animated film Hullabaloo and its accompanying educational series, Ask the Professor. He is the author of The Ouroboros Cycle series and several other works of fiction. He has been covered by The New York Times, San Francisco Chronicle, Hartford Courant, Marie Claire Italia, Time Out New York, New York Magazine, and MTV.
Loading...
or
Not Currently Available for Direct Purchase