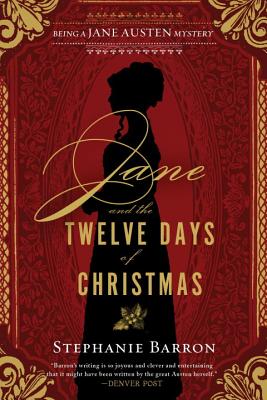 Jane and the Twelve Days of Christmas

Jane Austen turns sleuth in this delightful murder mystery set over the twelve days of a Regency-Era Christmas party.
Christmas Eve, 1814: Jane Austen has been invited to spend the holiday with family and friends at The Vyne, the gorgeous ancestral home of the wealthy and politically prominent Chute family. As the year fades and friends begin to gather beneath the mistletoe for the twelve days of Christmas festivities, Jane and her circle are in a celebratory mood: "Mansfield Park" is selling nicely; Napoleon has been banished to Elba; British forces have seized Washington, DC; and on Christmas Eve, John Quincy Adams signs the Treaty of Ghent, which will end a war nobody in England really wanted.
Jane, however, discovers holiday cheer is fleeting. One of the Yuletide revelers dies in a tragic accident, which Jane immediately views with suspicion. If the accident was in fact murder, the killer is one of Jane's fellow snow-bound guests. With clues scattered amidst cleverly crafted charades, dark secrets coming to light during parlor games, and old friendships returning to haunt the Christmas parties, whom can Jane trust to help her discover the truth and stop the killer from striking again?


Praise For Jane and the Twelve Days of Christmas…

Praise for the Being a Jane Austen Mysteries

"If you have a Jane Austen-would-have-been-my-best-friend complex, look no further....[Barron] has painstakingly sifted through the famed author's letters and writings, as well as extensive biographical information, to create a finely detailed portrait of Austen's life—with a dash of fictional murder....Some of the most enjoyable, well-written fanfic ever created."
—Oprah

"Wonderful...echoing the rhythms of the Austen novels with uncanny ease."
—Entertainment Weekly