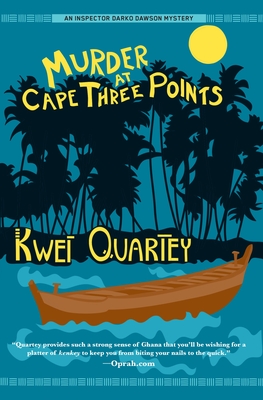 Accra’s hotshot Detective Inspector Darko Dawson returns to solve a complex mystery that will take him out of the city to the beautiful coasts of Ghana, where a grim double-murder seems to have larger political implications.

A canoe washes up at a Ghanaian off-shore oil rig site. Inside it are the bodies of a prominent, wealthy couple, Charles and Fiona Smith-Aidoo, who have been ritualistically murdered. Pillars in their community, they are mourned by everyone, but especially by their niece Sapphire. She is not happy that months have passed since the murder and the local police have made no headway in figuring out who committed the gruesome crime.

Detective Inspector Darko Dawson of the Accra police force is sent out to Cape Three Points to investigate. The more he learns about the case, the more convoluted it becomes. Three Points has long been occupied by traditional fishing populations, but real estate entrepreneurs and wealthy oil companies have been trying to bribe the indigenous inhabitants to move out. Dawson unearths a host of motives for murder, ranging from personal vendettas to corporate conspiracies.

"For hardcore Darko fans, and newcomers as well, this is a page-turner."
—PRI's The World

"In the context of a world still working on cleaning up the Gulf of Mexico oil spill, and where oil companies’ main hope of expansion comes from high-risk deep water drilling, Quartey’s message could not be more timely."
—Scott Montgomery, Book People Bookstore, Austin, TX

"Quartey portrays a the country of Ghana with all its charms and quirks, a culture that stands at the brink of the modern world, yet has not lost its tribal traditions. The result is a thoroughly fascinatng book."
—Janice Hunsche, Kaleidosaurus Books, Fishers, IN

"Quartey’s mastery of the art of misdirection serves him well in his third mystery featuring Accra, Ghana, homicide detective Darko Dawson ... A complex plot, combined with a warts-and-all lead and an evocative portrayal of the author’s native country, add up to a winner."
—Publishers Weekly, STARRED Review

"Fans of Alexander McCall Smith’s “No. 1 Ladies’ Detective Agency” series will enjoy the African setting and the large cast of interesting characters, while the twists and turns of Quartey’s plotting will satisfy any choosy mystery fan."
—Library Journal

“Darko Dawson’s third case is his biggest and most ambitious yet ... Quartey lays out what feel like endless possibilities with exemplary patience and clarity, unveiling world beneath world in Dawson’s Ghana.”
—Kirkus Reviews

"Kwei Quartey writes incredibly well about Ghana, about crime, and about the people he has created. If you're an armchair traveling sleuth like I am, I advise you to add him to your list of must-reads."
—Kittling Books

"I particularly appreciate being able to travel there [Ghana] in this way, through the eyes of an author who experiences multiple cultures, and a police officer who has reason to challenge his environment."
—Kingdom Books

"Kwei Quartey does what all the best storytellers do. He takes you to a world you have never seen and makes it as real to you as your own backyard. Inspector Darko Dawson is relentless and I look forward to riding with him again."
—Michael Connelly

"An absolute gem of a first novel and the sort of book that will delight not only hard-core mystery fans, but also those who visit the genre only casually in search of an occasional literary entertainment.... Wife of the Gods undoubtedly will be compared with Alexander McCall Smith's phenomenally successful No. 1 Ladies' Detective Agency series, but Quartey's debut is—to this reader, at least—a far richer and more sophisticated experience."
—Los Angeles Times

"[A] crisp, engrossing debut.... [Quartey] renders a compelling cast of characters inhabiting a world precariously perched between old and new. Fans of McCall Smith’s No. 1 Ladies’ Detective Agency novels will relish the opportunity to discover yet another intriguing area of Africa."
—Booklist, Starred Review

"Quartey convincingly portrays the seedy underbelly of Accra, Ghana's capital city.... Quartey cleverly hides the culprit, but the whodunit's strength is as much in the depiction of a world largely unfamiliar to an American readership as in its playing fair."
—Publishers Weekly, Starred Review

Kwei Quartey is a crime fiction writer and retired physician based in Pasadena, California. Quartey was born in Ghana, West Africa, to a Ghanaian father and a black American mother, both of whom were lecturers at the University of Ghana. His novel Wife of the Gods made the Los Angeles Times bestseller list in 2009. The following year, the National Book Club voted him Best Male Author. He has two mystery series set in Ghana: the Detective Inspector Darko Dawson investigations  and the Emma Djan investigations.
Loading...
or
Not Currently Available for Direct Purchase