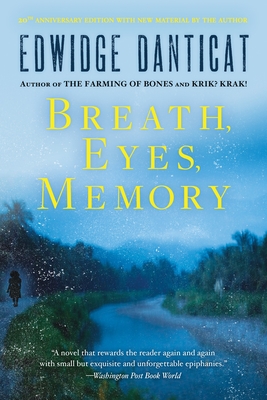 The 20th anniversary edition of Edwidge Danticat's groundbreaking debut, now an established classic--revised and with a new introduction by the author, and including extensive bonus materials

At the age of twelve, Sophie Caco is sent from her impoverished Haitian village to New York to be reunited with a mother she barely remembers. There she discovers secrets that no child should ever know, and a legacy of shame that can be healed only when she returns to Haiti—to the women who first reared her. What ensues is a passionate journey through a landscape charged with the supernatural and scarred by political violence. In her stunning literary debut, Danticat evokes the wonder, terror, and heartache of her native Haiti—and the enduring strength of Haiti’s women—with vibrant imagery and narrative grace that bear witness to her people’s suffering and courage.

"A novel that rewards the reader again and again with small but exquisite and unforgettable epiphanies."
—Washington Post Book World

“Written in prose as clear as a bell, magical as a butterfly, and resonant as drum talk . . . An impressive debut.”
—Julia Alvarez, author of In the Time of the Butterflies

“Reading Edwidge Danticat’s first novel, Breath, Eyes, Memory, for the first time in 2015 is a remarkable experience . . . It is clear in retrospect that this is a novel whose literary resonance has been profound, one that opened many doors for others—without it, would we have The Brief and Wondrous Life of Oscar Wao?”
—Barnes and Noble Review

"Danticat has created a stirring tale of life in two worlds: the spirit-rich land of her ancestry, whose painful themes work their way through lives across generational lines, and her adopted country, the United States, where a young immigrant girl must negotiate cold, often hostile terrain, even as she spars with painful demons of her past."
—Emerge

Why do you think the author uses French and Haitian

Creole words throughout the text? What does the use of

either or both languages suggest about class differences

among the characters in the novel?

How is the use of the colors yellow, red, and blue

significant in the novel? What do you think they mean?

In the first section of the book, Sophie is often seen pulling a sheet over

her head. Why do you think she does that? How do those moments

her the “test” for the first time?

What does Martine mean by “There are secrets you cannot keep.” How

does Sophie interpret those words?

with blood constantly spurting out of her unbroken skin.” How does

that story relate to the lives of the Caco women?

long? Do you think it was a good idea for her to go?

The Caco women seem to mostly communicate through stories. Why

do you think that is? What roles do maxims and proverbs play in the

Near the end of the book, Tante Atie says, “Young girls should be

allowed to keep their pleasant stories.” Do you agree? Should everyone

be allowed to keep their pleasant stories, even when surrounded by

dark realities? Do the Caco women have any pleasant stories?

Joseph is extremely understanding, both as a husband and as a father.

her life? Do you think things would have turned out differently for

At the end of the novel, Sophie’s grandmother asks her, “Ou libere? Are

you free, my daughter?” She also tells her, “Now you will know how to

answer.” How do you think Sophie would answer? How would you?