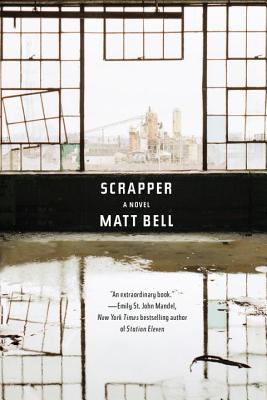 For fans of The Dog Stars and Station Eleven, Scrapper traces one man's desperate quest for redemption in a devastated Detroit. "Has the feel of Cormac McCarthy's The Road set in present-day Motor City... powerful."
--Publishers Weekly Detroit has descended into ruin. Kelly scavenges for scrap metal from the hundred thousand abandoned buildings in a part of the city known as "the zone," an increasingly wild landscape where one day he finds something far more valuable than the copper he's come to steal: a kidnapped boy, crying out for rescue. Briefly celebrated as a hero, Kelly secretly avenges the boy's unsolved kidnapping, a task that will take him deeper into the zone and into a confrontation with his own past and long-buried traumas. The second novel from the acclaimed author of In the House upon the Dirt between the Lake and the Woods, Scrapper is a devastating reimagining of one of America's greatest cities, its beautiful architecture, its lost houses, shuttered factories, boxing gyms, and storefront churches. With precise, powerful prose, it asks: What do we owe for our crimes, even those we've committed to protect the people we love?

Matt Bell is the author of the novel In the House upon the Dirt between the Lake and the Woods, a finalist for the Young Lions Fiction Award, a Michigan Notable Book, and an Indies Choice Adult Debut Book of the Year Honor Recipient, as well as the winner of the Paula Anderson Book Award. His stories have appeared in Best American Mystery Stories, Conjunctions, Gulf Coast, The American Reader, and many other publications. Born in Michigan, he now teaches creative writing at Arizona State University.
Loading...
or
Not Currently Available for Direct Purchase