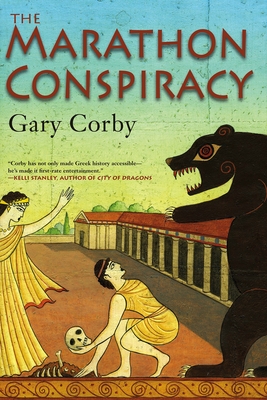 The Marathon Conspiracy (An Athenian Mystery #4)

The rollicking fourth book in the Nicolaos and Diotima mystery series set in Classical Athens.

Nicolaos, Classical Athens’s favorite sleuth, and his partner in investigation, the clever priestess Diotima, have taken time off to come home and get married. But hoping to get hitched without a hitch proves overly optimistic: A skull discovered in a cave near the Sanctuary of Artemis, the ancient world’s most famous school for girls, is revealed to be the remains of the Hippias, the reviled last tyrant to rule Athens. The Athenians fought the Battle of Marathon to keep this man out of power; he was supposed to have died thirty years ago, in faraway Persia. What are his remains doing outside the city walls? Nico’s boss, the great Athenian statesman Pericles, wants answers, and he orders Nico to find them. Worst of all, one of the two Sanctuary students who discovered the skull has been killed, and the other is missing. Can the sleuths solve the interlocked crimes before their wedding?

Praise For The Marathon Conspiracy (An Athenian Mystery #4)…

Praise for The Marathon Conspiracy

"The Marathon Conspiracy is a fast-paced, enjoyable, murder mystery that will make readers laugh and think in equal measure."
—The Sydney Morning Herald

“[The Marathon Conspiracy] mixes fact and fiction into a fine froth of a meal.”
—San Jose Mercury News

“Every new volume further highlights the tricky thing Corby so consistently manages to create: comedic mysteries that still have heft. In the manner of what Lindsey Davis and David Wishart give readers for ancient Rome, Corby presents an ancient Greek world that’s vibrantly, gawkishly alive; if you haven’t tried this series yet, The Marathon Conspiracy is the perfect place to start.”
—Open Letters Monthly

“Gary Corby has managed an unlikely feat with his series . . . he's written mysteries that combine funny characters and intriguing crimes with accurate history. The Marathon Conspiracy is never dull . . . The escapades of the detective will keep readers laughing, while the history lesson will leave them feeling a little bit smarter.”
—Shelf Awareness

"Corby gives readers a mix of historic and fictional characters that blend seamlessly. The use of modern-day language and touches gives the story the humorous edge it needs."
—Mystery Scene

“This will have the wealth of historical mystery buffs jumping up and down for joy . . . so well-written you will feel as if you are truly part of the Ancient World. As with Corby’s other works, the tale is full of humor, suspense-filled plots, subplots, and characters that are unforgettable. It is no overstatement to say that Corby most definitely knows his history backwards and forwards, providing stories that are beyond exciting.”
—Suspense Magazine

"A fast-paced, well-researched historical mystery . . . The plot is lively with some great moments of humor. A map, a historical timeline for the era, and some brief background notes make this very easy to read. Definitely recommended."
—Deadly Pleasures

“This series of mysteries set in ancient Greece is an entertaining one, and The Marathon Conspiracy is a solid entry in it . . . the contemporary feel of the narrative and dialog makes the lives and practices of the ancient Greeks quite approachable.”
—Mysterious Reviews

"Outstanding . . . Everything works in this installment—the detective business, the action sequences, the plot twists, and the further development of the series lead."
—Publishers Weekly, Starred Review

"Displaying historical humor at its best, this is Corby's fourth in his classical Greek series."
—Library Journal

"Corby has not only made Greek history accessible—he's made it first-rate entertainment."
—Kelli Stanley, award-winning author of City of Dragons

"Those who like their historicals with a touch of humor will welcome Australian author Corby's promising debut . . . Corby displays a real gift for pacing and plotting."
—Publishers Weekly, Starred Review

"Mix one part ancient history, one part clever and contemporary banter, and one part action, and you have a top-notch crime caper . . . Highly recommended for those looking for humor with their crime detecting."
—Library Journal

is the author of four other Athenian mysteries: The Pericles Commission, The Ionia Sanction, Sacred Games, and Death Ex Machina. He lives in Sydney, Australia, with his wife and two daughters. He blogs at A Dead Man Fell from the Sky, on all things ancient, Athenian, and mysterious.
Loading...
or
Not Currently Available for Direct Purchase