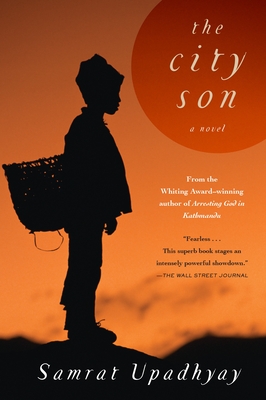 Set in Samrat Upadhyay’s signature and timeless Nepal, The City Son offers a vivid portrait of a scorned woman’s lifelong obsession with revenge and the devastating ramifications for an impressionable young man.

Acclaimed and award-winning author Samrat Upadhyay—the first Nepali-born novelist writing in English to be published in the West—has crafted a spare, understated work examining a taboo subject: a wife’s obsession with her husband’s illegitimate son. When Didi discovers that her husband, the Masterji, has been hiding his beautiful lover and their young son, Tarun, in a nearby city, she takes the Masterji back into her grasp and expels his second family. Tarun’s mother, heartsick and devastated, slowly begins to lose her mind, and Tarun turns to Didi for the mothering he longs for. But as Tarun gets older, Didi’s domination of the boy turns from the emotional to the physical, and the damages she inflicts spiral outward, threatening to destroy Tarun’s one chance at true happiness. Potent, disturbing, and gorgeously stark in its execution, The City Son is a novel not soon forgotten.

“Reading Samrat Upadhyay's disturbing new novel, The City Son, is the literary equivalent of watching a horror film. His style is assured and unadorned. The occasional metaphor, such as 'this dead blackbird inside her,' arrives to arresting effect. Upadhyay leaves us holding our breaths.”
—Cleveland Plain Dealer

“[The City Son] examines the vengeance of a truly evil woman scorned . . . Not for the faint of heart.”
—Booklist

“In an assured and subtle manner, Upadhyay anchors small yet potent epiphanies in a place called Kathmandu, and quietly calls it home.”
–Publishers Weekly

Samrat Upadhyay was born and raised in Nepal. He is the author of Arresting God in Kathmandu, a Whiting Award winner; The Royal Ghost; The Guru of Love, a New York Times Notable Book and a San Francisco Chronicle Best Book of the Year; and Buddha’s Orphans. He has written for The New York Times and has appeared on BBC Radio and National Public Radio. Upadhyay teaches in the creative writing program at Indiana University.
Loading...
or
Not Currently Available for Direct Purchase