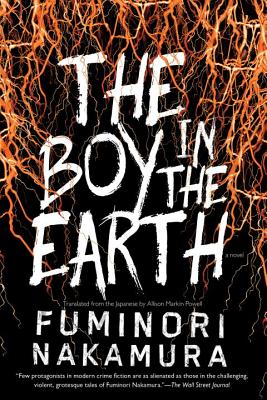 The Boy in the Earth

A darkly melancholic tale that combines Scorsese’s Taxi Driver and Camus’s The Fall set in Tokyo—Nakamura’s Akutagawa Prize-winning novel, one of Japan’s most prestigious literary awards, is the here translated into English for the first time and marks another high-water mark in this important writer’s career.

As an unnamed Tokyo taxi driver works a night shift, picking up fares that offer him glimpses into the lives of ordinary people, he can’t escape his own nihilistic thoughts. Almost without meaning to, he puts himself in harm’s way; he can’t stop daydreaming of suicide, envisioning himself returning to the earth in obsessive fantasies that soon become terrifying blackout episodes. The truth is, his long-estranged father has tried to reach out to him, triggering a cascade of traumatic memories. As the cab driver wrestles with the truth about his past and the history of violence in his childhood, he must also confront his present, which is no less complicated or grim.

A precursor to Los Angeles Times Book Prize finalist The Thief, The Boy in the Earth is a closely told character study that poses a difficult question: Are some lives so damaged they are beyond redemption? Is every child worth trying to save? A poignant and thought-provoking tour de force by one of Japan’s leading literary voices.

Praise For The Boy in the Earth…

Praise for The Boy in the Earth

"Absorbing . . . Just what abuse the narrator suffered as a youth is one of the puzzles to be solved (in horrific detail) by The Boy in the Earth. Another mystery is whether he will find a nonfatal way to break out of his Kafkaesque memory palace. By the book’s end, the reader comes to care about the second answer as much as the first."
—Tom Nolan, The Wall Street Journal

"Although many orders of magnitude darker, Nakamura may be the spiritual heir to Kenzaburō Ōe. This is existential literature at its compelling and nauseating best... His work isn’t merely noir as titillation; it’s the hideous truth below the surface, and he is one of the most vital writers at work today in Japan."
—The Japan Times

"[Nakamura] has demonstrated time and again, and does so again here, that he is one of the best crime novelist working today."
—PANK Magazine

"Nakamura is known for the dark nihilism of his fiction, but in this contemplation of whether even the most damaged of lives can be saved, there is a final ray of hope."
—Booklist

"Told in an intimate first-person narrative, Nakamura’s novel, translated for the first time into English, considers the long-term repercussions of abuse and a life on the fringe of society...this well-written sparse character study in psychological obsession will appeal to readers who like their fiction dark."
—Library Journal

"The Boy in the Earth offers readers a darkly philosophic musing on violence, history, purpose and what it means to be alive, told in elegant prose."
—Shelf Awareness

"The Zen master, the true Buddha of Noir, is the dark genius that is Fuminori Nakamura."
—This is Horror

"A thriller in the same elevated sense of Dostoevsky's Crime and Punishment or Camus' The Stranger."
—Reviewing the Evidence

"Haunting . . . The Boy in the Earth plumbs some seriously dark territory."
—Reading Matters

“Crime fiction that pushes past the bounds of genre, occupying its own nightmare realm . . . Guilt or innocence is not the issue; we are corrupted, complicit, just by living in society. The ties that bind, in other words, are rules beyond our making, rules that distance us not only from each other but also from ourselves.”
—Los Angeles Times

“A suspenseful study of obsession . . . Nakamura’s noir story, translated by Allison Markin Powell, is about liberation . . . Love, even illicit love, has a way of bringing out the best or the worst in a person.”
—The New York Times

“Few protagonists in modern crime fiction are as alienated as those in the challenging, violent, grotesque tales of Japanese author Fuminori Nakamura . . . Yurika’s struggle to escape her vexed fate elevates this shocker well above the lurid.”
—The Wall Street Journal

“This slim, icy, outstanding thriller, reminiscent of Muriel Spark and Patricia Highsmith, should establish Fuminori Nakamura as one of the most interesting Japanese crime novelists at work today.”
—USA Today

Fuminori Nakamura was born in 1977 and graduated from Fukushima University in 2000. He has won numerous prizes for his writing, including the Ōe Prize, Japan’s largest literary award; the David L. Goodis Award for Noir Fiction; and the prestigious Akutagawa Prize. The Thief, his first novel to be translated into English, was a finalist for the Los Angeles Times Book Prize. His other novels include The Gun, The Kingdom, Evil and the Mask, and Last Winter, We Parted.
Loading...
or
Not Currently Available for Direct Purchase