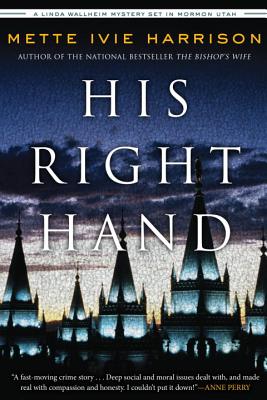 “In this riveting and compassionate mystery, beloved counselor Carl Ashby is found dead at church, leaving the Mormon community devastated. But when Linda and Kurt Wallheim learn that Carl was originally a female the news turns their world inside out, directing their focus away from the bigger issues at hand. In a community that is so set with its gender roles, can the Wallheims look past that to discover who killed Carl and why?”
— Rachael Drummond (W), Saturn Booksellers, Gaylord, MI
View the List

In the follow-up to the controversial and critically acclaimed mysteryThe Bishop's Wife, Mormon housewife Linda Wallheim finds herself ruffling feathers in Draper, Utah, as she assists a murder investigation that is being derailed by transphobia within the LDS community.
In Draper, Utah, a tight-knit Mormon community is thrown into upheaval when their ward's second counselor one of the bishop's right-hand men is found dead in an elaborately staged murder on church property. Carl Ashby was known as a devout Mormon, a pillar of the community, and a loving husband and father. Who would want him dead?
Linda Wallheim, the wife of the ward's bishop, can t rest as long as the ward is suffering. She is particularly worried about Carl's grieving family. But the entire case is turned upside down by the autopsy report, which reveals Carl Ashby was a biological female. In the Mormon church, where gender is considered part of a person's soul, some people regard transgenderism as one of the worst possible sins. Church officials seem to be more upset by Carl's gender than by his murder, and more concerned with hushing up the story than solving the crime.
Linda realizes that if the police are to catch the killer, they are going to need an ally on the inside and she is the only one who can help. Carl was living a life of secrecy for twenty years. What else was he hiding and can Linda ferret out the key to his death before the rumors tear her community apart?

Mette Ivie Harrison is the author of the Linda Wallheim mysteries, including The Bishop s Wife and For Time and All Eternities. She holds a PhD in German literature from Princeton University and is a nationally ranked triathlete. A member of the Church of Jesus Christ of Latter-Day Saints, she lives in Utah with her husband and five children."