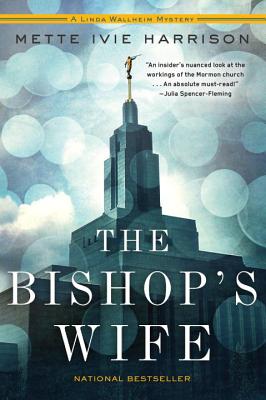 “Linda Wallheim is the local bishop's wife and the mother of five sons, all but one out of the house and on their own. As a Mormon, Linda has been increasingly frustrated with some of the Church's doctrine. While her life is busy fulfilling her duties with many community services and being the hostess for the ward at all hours, she chafes under the patriarchal beliefs and practices. When she is called to care for a five-year-old girl whose mother has mysteriously disappeared, Linda begins to question the circumstances of the young wife's absence. This is a beautifully written story about a woman who supports her husband as the bishop while recognizing that her inner convictions might go against his will. A compelling read!”
— Patricia Worth, River Reader LLC, Lexington, MO
View the List

In the predominantly mormon city of Draper, Utah, some seemingly perfect families have deadly secrets.

Linda Wallheim is a devout Mormon, mother of five boys and wife of a bishop. But Linda’s daily routine of church-going, Relief Society meetings, and visiting church ward members is turned upside down as a disturbing situation takes shape in her seemingly idyllic neighborhood. Young wife and mother Carrie Helm has disappeared. Carrie’s husband, Jared, claims that she has abandoned the family, but Linda doesn’t trust him. As she snoops, trying to learn more about the Helms’ circumstances, Linda becomes convinced Jared murdered his wife and painted himself as a wronged husband.

Inspired by a chilling true crime and written by a practicing Mormon, The Bishop’s Wife is both a fascinating peek into the lives of modern Mormons and a grim and cunningly twisted mystery.

Praise For The Bishop's Wife (A Linda Wallheim Mystery #1)…

Praise for The Bishop's Wife

“The Bishop’s Wife has good reason to draw a large readership. It places heavy emphasis on domestic abuse and on the question of how dangerous fire-breathing extremists really are. The man who inveighs against women as whores and sinners may or may not be anything worse than a crank. The man who speaks sanctimoniously of them may be much worse . . . That’s why Ms. Harrison’s Linda is such a welcome character: In her role as Sister Wallheim, she encourages women to speak freely, at least to her, and to escape the shame that has burdened some of them since childhood."
—Janet Maslin, The New York Times

"Sane, wise, likable . . . [The] solution is nicely surprising, and Linda has an engrossing voice, at once modest and assured."
—Charles Finch, USA Today

"Excellent . . . Watching Linda Wallheim take on the church and its entitled male members as she unravels the mystery of Carrie's and Helena's disappearances is one of the chief pleasures of this richly detailed debut."
—Los Angeles Times

“Critically acclaimed author Mette Ivie Harrison's mystery debut is an insider's nuanced look at the workings of the Mormon church. Beautifully written, and spellbinding in its unflinching examination of marriage, family and faith, The Bishop's Wife is an absolute must-read!”
—Julia Spencer-Fleming, New York Times and USA Today bestselling author of Through the Evil Days

"Eye-opening . . . A novel so far from my reality I needed a telescope, but I think that's why I enjoyed this debut so much."
—Carole E. Barrowman, Milwaukee Journal-Sentinel

"A novel so far from my reality I needed a telescope, but I think that’s why I liked it . . .  Gives an insider’s view of a patriarchal community where strict adherence to God’s rule is the path to an afterlife (with a similar patriarchy). While investigating the disappearance of a neighbor, Linda confronts the sins of her community."
—Minneapolis Star Tribune

"[The] Linda Wallheim novels are worth reading, and not only for their uncompromising plot lines and compelling conclusions. They should raise important and necessary questions about Mormonism itself in every thinking Mormon’s mind."
—Association for Mormon Letters

“Set against the unusual backdrop of a tight-knit Mormon congregation, The Bishop’s Wife is both a terrific crime novel and a wrenching story of faith, doubt, and personal tragedy.”
—Michael Wallace, Wall Street Journal and USA Today bestselling author of The Righteous

“Don't be deceived by the unassuming heroine and quiet start of The Bishop's Wife. In this gripping and contemplative mystery, a woman who most people would identify as living an ordinary life discovers she is the only one willing to pursue a dangerous puzzle. As she uncovers layers of deceit she struggles to remain true to her deeply courageous self.”
—Kate Elliott, bestselling author of the Spiritwalker Trilogy

"Harrison has an eye like a Nikon camera and an educated ear. I was amazed at her perfect pitch in her choice of words and gestures . . . Her book will do well nationally. It may even spawn a series of mysteries starring the bold and benevolent bishop’s wife. But will the book be too tart for conventional LDS tastes?"
—The Deseret News

"As the author offers insight into the patriarchal structure of the Mormon Church, readers also are introduced to a strong woman who strives to bring justice to those who are wronged."
—Missourian

"A great mystery . . . A novel that’s well worth reading, either all night long or during a particularly boring Sacrament meeting."
—Standard-Examiner

"With a plot that is ripped from the headlines and an insightful look into Mormon culture, The Bishop's Wife is the perfect combination of mystery and intrigue."
—Bookreporter.com

"A bit like an Agatha Christie mystery: a missing woman, a detestable husband, and a little girl caught in the balance . . . The Bishop’s Wife takes readers behind the glossy exterior of the Mormon Church and directly into the Bishop’s private—and not-so-private—home and office."
—Salt Lake Magazine

"A very intriguing and captivating mystery . . . [I] just wanted to read it without stopping."
—Fresh Fiction

"Harrison carefully crafts the clues to lead organically to a big plot twist and a change in direction later in the book that feels earned and believable. Not every writer is skilled enough to pull that off!"
—Unshelved

"Even without the two mysteries the book would have been an interesting read as readers follow Linda's struggles with her faith . . . Because of the broader scope of this book, I would strongly recommend the book for book groups—the discussions could last a lifetime."
—Reviewing the Evidence

"I highly recommend The Bishop’s Wife as a great work of women’s fiction. It would be an excellent choice for a book club as Mette Ivie Harrison digs deep into issues that face all women providing substantial material for discussion."
—Luxury Reading

"Do not avoid reading this book because you fear being bogged down by theological rambling. You won't be. Instead you'll be drawn into a story about a very interesting woman whose conscience will not let her stand idly by. Like so many other characters in crime fiction, Linda will not rest until she's found the truth."
—Kittling Books

"One of those stories you can’t stop reading until you find out what happens next . . . Harrison weaves a tale of deception and treachery that takes the reader on a twisting and mysterious path."
—Oceana Herald-Journal

“A wonderfully written mystery . . . The Bishop’s Wife is not only a great story, but a revealing look at Mormonism and its followers.”
—New York Journal of Books

"Harrison makes her adult debut with a stunning contemporary mystery set in Mormon country . . . [She] easily transports readers into a world most will find as unfamiliar as a foreign country."
—Publishers Weekly, STARRED Review

"The mystery surrounding Carrie drives the plot, but Linda herself is the most compelling thing about young adult author Harrison’s debut adult mystery about a world she knows well."
—Booklist, STARRED Review

"Adds twists aplenty to an insider's look at a religion replete with its own mysteries."
—Kirkus Reviews

"A novel that is comfortable with leaving us uncomfortable. Or, rather, that manages to leave us comfortable in our discomfort. Which is to say that I found The Bishop’s Wife an honest book."
—A Motley Vision

"Turns a critical eye toward some long-held norms of a historically patriarchal religion. Throw in a wickedly twisted mystery—actually, two—and you have the makings of a page-turner that is revealing and thought-provoking."
—The Hutchinson News

Mette Ivie Harrison is the author of three other novels in the Linda Wallheim mystery series, His Right Hand, For Time and All Eternities, and Not of This Fold, as well as numerous books for young adults. She holds a PhD in German literature from Princeton University and is a nationally ranked triathlete. A member of the Church of Jesus Christ of Latter-Day Saints, she lives in Utah with her husband and five children.
Loading...
or
Not Currently Available for Direct Purchase