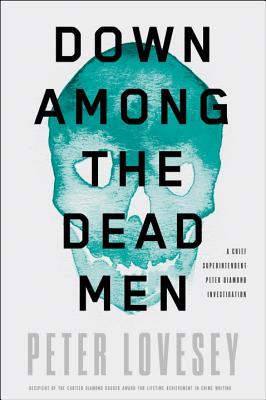 Down Among the Dead Men (A Detective Peter Diamond Mystery #15)

“Detective Superintendent Peter Diamond has been called off his current case load to join his boss, Assistant Chief Constable Georgina Dallymore, on an internal investigation. A detective is accused of failing to follow up on DNA evidence that could link her niece to a murder. It's an ethical violation case, but the evidence came to light three years ago and only now is she being accused. Diamond expects that more is happening than meets the eye. Meanwhile, a teacher from a private girls' school has gone missing and now the schoolgirl who was looking for her has disappeared as well. It's going to take a bit of doing to unravel what is happening in Sussex. If you've never read an Inspector Diamond book, this one is a great place to start.”
— Janice Hunsche (E), Kaleidosaurus Books, Fishers, IN
View the List

Peter Diamond takes a dive down among the dead men to solve a seven-year-old murder case in the latest installment of Peter Lovesey's classic procedural series.

In a Sussex town on the south coast of England, a widely disliked art teacher at a posh private girls’ school disappears without explanation. None of her students miss her boring lessons, especially since her replacement is a devilishly hunky male teacher with a fancy car. But then her name shows up on a police missing persons list. What happened to Miss Gibbon, and why does no one seem to care?

Meanwhile, detective Peter Diamond finds himself in Sussex, much against his wishes. His irritating and often obtuse supervisor, Assistant Chief Constable Georgina Dallymore, has made Diamond accompany her on a Home Office internal investigation. A Sussex detective has been suspended for failing to link DNA evidence of a relative to a seven-year-old murder
case—a bad breach of ethics. Diamond is less than thrilled to be heading out on a road trip with his boss to investigate a fellow officer, but he becomes much more interested in the case when he realizes who the suspended officer is—an old friend, and not a person he knows to make mistakes.

As Diamond asks questions, he begins to notice unsettling connections between the cold case and the missing art teacher. Could the two mysteries be connected? How many other area disappearances have gone unnoticed and uninvestigated? Diamond and his hapless supervisor have stumbled into a web of related crimes. Will Diamond be able to disentangle them?

Praise for Down Among the Dead Men

"What’ll it be today? A knotty puzzle mystery? A fast-paced police procedural? Something more high-toned, with a bit of wit? With the British author Peter Lovesey, there’s no need to make those agonizing decisions, because his books have it all."
—The New York Times Book Review

"[Lovesey is] a nimble standard-bearer for the whodunit tradition that goes back to the Golden Age of detective fiction . . . a cunning logic puzzle, a devilishly inspired bit of story crafting."
—Richmond Times-Dispatch

"Lovesey not only spins a satisfying whodunit—there’s a contemporary case as a subplot, too—but continues to develop the complicated, intriguing relationship between Diamond and his boss, Assistant Chief Constable Georgina Dallymore."
—The Strand Magazine

"One of Lovesey's finest."
—Mystery Scene

"Lovesey is a masterful plotter, and that alone would earn him praise and fans, but his characters are memorable, and Diamond is a glittering gem among them. In addition to those strengths Lovesey adds wit, humor, and finely structured prose."
—Alfred Hitchcock Mystery Magazine

"Peter Lovesey’s Down Among the Dead Men gives us Diamond at his best."
—Open Letters Monthly

"This is the kind of clever, densely packed puzzle we don’t see much of these days. It’s engrossing, well-written and original."
—The Buffalo News

"Peter Lovesey is a marvel. If you love or even like mysteries, he needs to be at the top of your must-read list."
—Bookreporter

"Lovesey is in top form in Down Among the Dead Men . . . A fascinating read. Great plotting and exciting action."
—Fresh Fiction

"Peter Lovesey is back with a winner . . . When you finish reading Down Among the Dead Men, you'll have a smile on your face, knowing that you've just been given a lesson in deduction by a master."
—Kittling Books

"[A] novel of engaging prose, intriguing and credible plot, and believable characters with a likable lead. In Down Among the Dead Men, Lovesey delivers a fine read."
—New York Journal of Books

“Diamond is a wonderfully rounded character whose lines are witty and whose observations about people’s characters and motives are brilliantly insightful. Vintage Diamond mystery, spiced by his comic encounters with his supervisor: a must for devotees of character-driven British crime fiction.”
—Booklist, Starred Review

"Dallymore and Diamond illustrate that good cops and intriguing mysteries can go together. Ideal for those who prefer cerebral rather than graphic whodunits."
—Library Journal

Praise for the Peter Diamond Series

“These erudite and wondrously witty books are unlike any police procedural you’ve ever read.”
—The New York Times Book Review

“Lovesey’s books are so beautifully constructed and cleanly written that they could be used as textbooks in a crime writing course.”
—Chicago Tribune

“Ingenious . . . Lovers of good music and a good mystery should not miss this delightful tale.”
—Washington Post Book World

Peter Lovesey is the author of more than thirty highly praised mystery novels. He has been awarded the CWA Gold and Silver Daggers; the Cartier Diamond Dagger for Lifetime Achievement; the Strand Magazine Award for Lifetime Achievement; the Macavity, Barry, and Anthony Awards; and many other honors. He lives in West Sussex, England.
Loading...
or
Not Currently Available for Direct Purchase