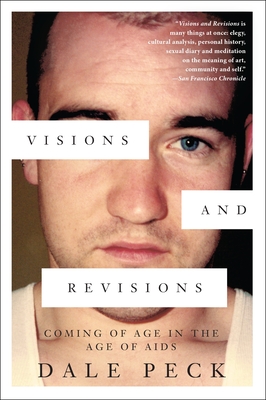 Coming of Age in the Age of AIDs

Novelist and critic Dale Peck’s latest work—part memoir, part extended essay—is a foray into what the author calls “the second half of the first half of the AIDS epidemic,” i.e., the period between 1987, when the AIDS Coalition to Unleash Power (ACT UP) was founded, and 1996, when the advent of combination therapy transformed AIDS from a virtual death sentence into a chronic manageable illness.

Reminiscent of Joan Didion’s The White Album and Kurt Vonnegut’s Palm Sunday, Visions and Revisions is a sweeping, collage-style portrait of a tumultuous era. Moving seamlessly from the lyrical to the analytical to the reportorial, Peck’s story takes readers from the serial killings of gay men in New York, London, and Milwaukee, through Peck’s first loves upon coming out of the closet, to the transformation of LGBT people from marginal, idealistic fighters to their present place in a world of widespread, if fraught, mainstream acceptance.

The narrative pays particular attention the words and deeds of AIDS activists, offering a streetlevel portrait of ACT UP with considerations of AIDS-centered fiction and criticism of the era, as well as intimate, sometimes elegiac portraits of artists, activists, and HIV-positive people Peck knew. Peck’s fiery rhetoric against a government that sat on its hands for the first several years of the epidemic is tinged with the idealism of a young gay man discovering his political, artistic, and sexual identity. The result is a visionary and indispensable work from one of America’s most brilliant and controversial authors.

Praise For Visions and Revisions: Coming of Age in the Age of AIDs…

Praise for Visions and Revisions

"Peck offers a flinty-eyed look into the heart of the H.I.V. epidemic, from the late 1980s until the development of protease inhibitors and combination therapies in the mid-1990s. As we would expect, a portion of Peck’s narrative is told in the letters and stories of those claimed by AIDS—fellow activists, friends, lovers—and of course his work for Act Up is crucial. But the investigation of serial killers who trolled for gay men in London and New York provides perhaps the strongest elicitation of those years of ignorance, discrimination and fear . . . A compelling snapshot of the social activism that defined the era."
—The New York Times Book Review

"Peck shows himself to be a memoirist in Sontag’s mold."
—Los Angeles Review of Books

“Visions and Revisions is many things at once: elegy, cultural analysis, personal history, sexual diary and meditation on the meaning of art, community and self . . . [Peck] offers a personal philosophy grounded in trauma, collective struggle and a craving for language. "
—San Francisco Chronicle

"A coming-of-age tale for both the gay community at large and a nation coming to terms with that community’s place in American society . . . Peck’s sharp writing moves nimbly and restlessly between nostalgic tenderness and the stinging critiques that once moved Slate’s Laura Kipnis to call him 'the current laureate of critical evisceration.'"
—The Boston Globe

"A powerful testament."
—Out Magazine

"At times engrossingly easy to read and at times extremely emotionally difficult, Visions and Revisions is so intimate that it feels almost like reading someone’s diary. It is a powerful reminder of how far we’ve come in our treatment of and attitudes regarding HIV and AIDS. In addition, Peck’s smart, compassionate, insightful book reminds us that, though that journey has been long and hard, it is something to be remembered and to be proud of."
—Metrosource

"Although a relatively short memoir, Visions and Revisions comes to contain an indispensable mini-canon of cultural theory, essay, and reportage from the crisis. But that’s just a bland, aloof way of stating that, in almost every moment, Peck’s book asserts itself as a bold yet considered act of militant nostalgia—the filmmaker Thom Andersen’s term for intervening in the past in order to open up new possibilities for the future. Peck is revising our understanding of the crisis as much as reading its history aloud."
—Jonathon Sturgeon, Flavorwire

"Both compelling and unsettling."
—Interview Magazine

"A brilliant memoir . . . Visions and Revisions gives us intense flashes of intimacy, revelations most writers wouldn't have the balls to put on paper . . . The best moments come when Peck's punchy genius fails, when a ghost suddenly steps into his writing room, when the know-it-all puts down his sword and admits he doesn't know how to say what he wishes he could say."
—The Stranger

"I devoured Peck’s memoir in two sittings. How could anyone, I thought, write a book that seemed such an unapologetic and deeply pleasurable blend of Kathy Acker and Theodor Adorno? The book’s mélange of theory and anecdote was bracing."
—Annie DeWitt, BookForum

"The breadth of [Visions and Revisions] demonstrates his skill as a journalist, social analyst, essayist, diarist, poet and novelist. The entire first 172 pages serve as a preface and footnote both to the concluding section, '13 ecstasies of the soul.' These final pages elevate the entire text from sociology to poetry, theology, and mysticism rooted in the physical experience of the body."
—Lamda Literary

"Illuminating . . . Peck has provided an intimate sense of a life and consciousness formed during years of epidemic and activism."
—A&U Magazine

“Dale Peck uses every weapon in his considerable arsenal, from criticism to journalism to memoir, in order to close the gap in our understanding of what it was like to live at the tail end of the time when AIDS was almost always lethal. Peck’s signature tightly controlled literary rage finds perhaps its worthiest target so far, and the result is a book that’s both necessary and exhilarating to read.”
—Emily Gould, author of Friendship

“History as clarion call, memoir as revolution; Visions and Revisions is a book powerfully alive with a story that needed not just to be written, but to be interrogated with honesty, courage and no small amount of defiance. Unforgettable in its detail, moving in its truth, acerbic at all the right moments and open at its very core: Dale Peck has made something extraordinary. I closed the book wanting immediately to read it again.”
—Belinda McKeon, author of Tender

“Dale Peck boldly returns to his own war, the terrifying plague years in New York, and accomplishes what few have attempted: he discovers mercy and absolution, where merited. And love. Visions and Revisions is a transformative work.”
—David France, director of How to Survive a Plague

"Death is present throughout this intense narrative, but it appears as a theme with particularly dark power in Peck’s gutsy paralleling of the devastating impact of AIDS on the gay community with the horrors of gay serial killers of the era . . . Peck contrasts his findings about this tragic and frightening time of ignorance, discrimination, fear, suffering, and lack of compassion and support with today’s far more enlightened attitudes toward illness, health care, and LGBT people."
—Booklist

"[Visions and Revisions] provides a unique bird's eye view into how one man coped with stigma and fear in the early days of a pandemic that still rages. As more and more people—infectious disease physicians included—have dimmer recollections of the horrible march of HIV in 1980 and 1990s America, immersing oneself in the early days of the plague with a colorful tour guide becomes increasingly more important."
—Dr. Amesh Adalja, infectious disease specialist writing on his blog, Tracking Zebra

"Peck has galvanized his reputation as one of the most eloquent voices of his generation."
—The New York Times

"Peck is not only one of the leading literary voices of his generation, but also one of the few avant-garde writers of any age who is changing the rules for prose fiction. His novels simultaneously define and defy the genre."
—Los Angeles Times

"Few writers have Dale Peck's nerve. He writes without secrets, packing his novels with the intimacies of his life, his family, his sexuality."
—The Nation

"[Dale Peck] gives me what I look for most when I open a new book: a world that is our world and also full of things I didn't know, characters in scenes that are at once recognizable and indelible."
—Chicago Tribune

Dale Peck is the author of twelve books in a variety of genres, including Martin and John, Hatchet Jobs, and Sprout, and is the editor of The Soho Press Book of ’80s Short Fiction. His fiction and criticism have appeared in dozens of publications, and have earned him two O. Henry Awards, a Pushcart Prize, a Lambda Literary Award, and a John Simon Guggenheim Memorial Fellowship. He lives in New York City, where he has taught in the New School’s graduate writing program since 1999.
Loading...
or
Not Currently Available for Direct Purchase