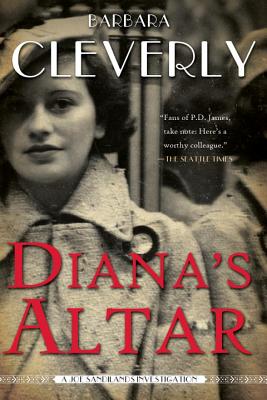 Cambridge, 1933. On All Hallows’ Eve, in a candlelit pew in ancient All Hallows Church, Doctor Adelaide Hartest witnesses a stranger’s dying moments. Adelaide is just in time to hear his final confession: that he has plunged the dagger into his own chest, and that his death will be a suicide, despite its suspicious appearance.

But his confession isn’t enough to halt an investigation. The victim, it is revealed, is known to Scotland Yard, and his death is a matter of national concern. Assistant Commissioner Joe Sandilands is sent up from London to discover the truth. Thrown into a deadly ring of cloak-and-dagger intrigue and high-society hedonism, Sandilands chases a phantom killer through Cambridge’s aristocracy, intelligentsia, cutting-edge researchers, and a clandestine ring of female spies. What secret was the dead man hiding, and what is at stake?

"There are so many aspects of Diana’s Altar to celebrate, chief among them Cleverly’s intelligent characters and an agreeably labyrinthine master narrative. Adding to the fun is Cleverly’s gift for generating spirited dialogue, peppered with period slang."
—The Washington Post

"The quiet English college town of Cambridge in the late fall of the Depression year of 1933 seems to be a curious setting for a tale of murder and espionage. But somehow, British novelist Barbara Cleverly makes it work in Diana’s Altar . . . Sandilands suspects murder—and goes on to prove it, tracking down the surprising killer . . . well-done."
—St. Louis Post-Dispatch

"Sandilands [is] among the most dashing cops of British crime fiction . . . A happy blend of traditional whodunit and espionage thriller, Diana's Altar—the phrase comes from Shakespeare—proceeds with perfect pacing to a frightening climax and a full measure of justice."
—Richmond Times-Dispatch

"The fast-paced plot has a compelling rhythm. Like all of Cleverly’s novels—she also writes the Laetitia Talbot Mysteries—there are well-developed characters, an authentic setting, and a few classical allusions; but it is Joe Sandilands’ likeability that brings readers back. Recommended for anyone who loves historical mysteries."
—The Historical Novel Society

"One of Barbara Cleverly's more complex plots, Diana's Altar is a legitimate page turner and a novel that will delight all the author's ardent fans and create new readers as well."
—BookLoons

“Despite her mastery at vivid scene-setting, Cleverly never loses sight of the historical puzzle that is central to her story. Simply put, it’s a stunner.”
—The New York Times Book Review

“Stylish and intricate . . . Cleverly has perfect pitch for period and place, whether her hero is unearthing evil in India, England or France.”
—Richmond Times-Dispatch

“Cleverly is a terrific writer . . . Fans know that she supplies the glamour as well as the grime, and she’s one of the most adept puzzle-plot-makers now working. The clues are all there. But you won’t guess who it is until she gives you the final word.”
—The Globe and Mail

“The appearance of a Joe Sandilands book is always welcomed by fans of this intelligent and gripping series.”
—San Jose Mercury

Barbara Cleverly was born in the north of England and is a graduate of Durham University. A former teacher, she has spent her working life in Cambridgeshire and Suffolk; she now lives in Cambridge. She is the author of thirteen books in the Joe Sandilands series, including The Last Kashmiri Rose, The Blood Royal, Not My Blood, A Spider in the Cup, and Enter Pale Death.
Loading...
or
Not Currently Available for Direct Purchase