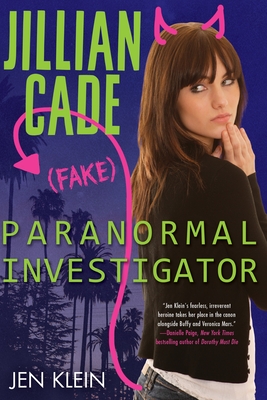 Jillian Cade doesn’t believe in the paranormal, unlike her famous father, a professor and expert on the occult. Ever since he abandoned her to travel the world for “research,” she’s milked his reputation—and all the suckers who believe in the stuff—by taking over his private investigation firm. After all, a high school junior has to take care of herself, especially when she’s on her own.

Ironically, it’s when she takes on a case that might involve a totally non-paranormal missing person that things get strange. Particularly when Sky Ramsey—a new boy at school who insists on becoming her partner—won’t shut up about succubi, of all things.

As they investigate, Jillian is surprised by her feelings for Sky, which threaten to derail the investigation. But that surprise is no match for the shock of learning that there may be something to Sky’s succubi obsession after all.

“Jillian Cade is the real thing. Jen Klein's fearless, irreverent heroine takes her place in the canon alongside Buffy and Veronica Mars . . . an irresistible, smart, and heartfelt debut with a paranormal twist that kept me guessing until the action-packed end.”
—Danielle Paige, New York Times bestselling author of Dorothy Must Die

"Klein builds her underworld with both logic and farce, paralleling Jillian's own skepticism and quick wit."
—Kirkus Reviews

"A detective story with a heavy romance bent . . . Klein’s story is quick and funny despite its darker subject matter."
—School Library Journal

"Klein’s first novel for young adults is funny and suspenseful, and many readers will relate to protagonist Jillian Cade’s cynicism (not surprising given her family situation and lack of popularity with her peers). Part mystery, part romance, with real paranormal action, this book will appeal to fans of mystery, fantasy, and romance."
—VOYA

“To say this is a mash-up of Veronica Mars and The X-Files doesn’t quite do Jillian justice. She’s her own strong, scathingly witty, big-hearted phenomenon, and her story will keep you up late, turning pages.”
—Nina Berry, author of The Notorious Pagan Jones

Emmy-nominated writer Jen Klein grew up in North Carolina and studied theater at Appalachian State University. She wrote the screenplay for the movie The Choking Game and is also the author of the forthcoming contemporary YA romance Shuffle, Repeat. Jen is currently a writer on the hit TV series Grey’s Anatomy. She lives in Los Angeles with her husband, two sons, and several animals, all of whom are unruly and ill-behaved.
Loading...
or
Not Currently Available for Direct Purchase