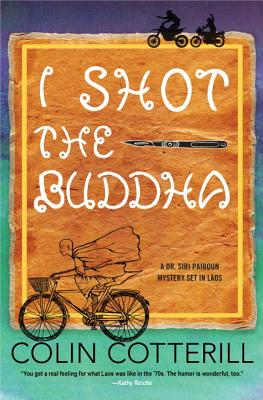 I Shot the Buddha (A Dr. Siri Paiboun Mystery #11)

A fiendishly clever mystery in which Dr. Siri and his friends investigate three interlocking murders—and the ungodly motives behind them

Laos, 1979: Retired coroner Siri Paiboun and his wife, Madame Daeng, have never been able to turn away a misfit. As a result, they share their small Vientiane house with an assortment of homeless people, mendicants, and oddballs. One of these oddballs is Noo, a Buddhist monk, who rides out on his bicycle one day and never comes back, leaving only a cryptic note in the refrigerator: a plea to help a fellow monk escape across the Mekhong River to Thailand.

Naturally, Siri can’t turn down the adventure, and soon he and his friends find themselves running afoul of Lao secret service officers and famous spiritualists. Buddhism is a powerful influence on both morals and politics in Southeast Asia. In order to exonerate an innocent man, they will have to figure out who is cloaking terrible misdeeds in religiosity.

Praise For I Shot the Buddha (A Dr. Siri Paiboun Mystery #11)…

Praise for I Shot the Buddha

A BookPage Best Mystery of 2016

"[Siri] is the most wonderfully human of heroes."
—The Christian Science Monitor

“Stunning . . . This series offers unfailingly satisfying reading, especially so for the glimpses we get into the still-revolutionary characters of Siri and Madame Daeng, both bursting with caustic wit and adventurous spirit.”
—Booklist, Starred Review

“Cotterill excels in the portrayal of potentially serious and momentous topics with lighthearted humor, imbuing his characters with grace and empathy in the midst of a particularly difficult chapter of Southeast Asia's history.”
—BookPage, Top Pick in Mystery

Praise for Six and a Half Deadly Sins

"Dr. Siri and his misfit friends have relied on caustic humor to stay sane . . . The question is: Can his cynical sense of humor get him out of this jam?"
—The New York Times Book Review

"A gladdening complement to many mystery-reader's table . . . If you are unfamiliar with Paiboun works, it is time to crawl out of whatever cave you have been living in. This is for you."
—The Christian Science Monitor

"Always delightful . . . the doctor and his profoundly eccentric friends, wife and (now former) colleagues retain their sardonic senses of humor in a vexing and sometimes scary time."
—The Seattle Times

Colin Cotterill is the author of eleven other books in the Dr. Siri Paiboun series: The Coroner’s Lunch, Thirty-Three Teeth, Disco for the Departed, Anarchy and Old Dogs, Curse of the Pogo Stick, The Merry Misogynist, Love Songs from a Shallow Grave, Slash and Burn, The Woman Who Wouldn’t Die, Six and a Half Deadly Sins, and The Rat-Catchers’ Olympics. His fiction has won a Dilys Award and a CWA Dagger in the Library. He lives in Chumphon, Thailand, with his wife and five deranged dogs.
Loading...
or
Not Currently Available for Direct Purchase