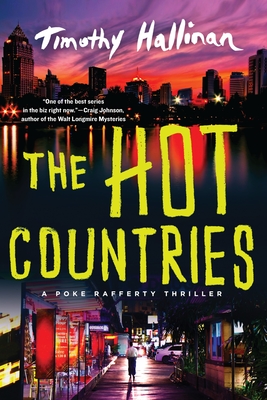 Back when Poke Rafferty first arrived in Bangkok to write a travel guide, some of the old-timers in the Expat Bar on Patpong Road helped him make sense of the city. Now these men—many of whom have been living in Southeast Asia since the Vietnam War—have grown old and, in some cases, frail. When a talkative stranger named Arthur Varney turns up at the Expat Bar, they accept him without suspicion, failing to see that he’s actually using them to get to Poke.

Varney wants two things: money Poke doesn’t have and a person Poke is unwilling to hand over. It quickly becomes apparent that there’s nothing Varney won’t do to secure his goals. As his actions threaten the foundation of Poke’s life in Thailand, the aging men of the Expat Bar discover that they might still be a force to reckon with.

Praise For The Hot Countries (A Poke Rafferty Novel #7)…

Praise for The Hot Countries

"Fans of the series won’t want to miss [The Hot Countries'] violent conclusion."
—The Strand Magazine

"Hallinan’s latest in the brilliantly conceived Poke Rafferty series starts with menace and never lets up."
—The Arizona Republic

"If there was any doubt that Timothy Hallinan is one of our best in the constellation of thriller authors, then The Hot Countries should resolve that issue in his favor."
—Bookreporter.com

"This is a first-rate suspense story, written to keep the reader on tenterhooks. As usual, the odors and sights of Bangkok are clearly described so that one can see and smell them as realistically as feeling the continually falling rain—and, especially, the poignant interactions of all the characters. Highly recommended!"
—Kings River Life

"Poke is a charming protagonist who loves his family and friends fiercely and will do anything to protect them. Highly entertaining."
—Library Journal, Starred Review

“A fantastic thriller that will please the most plot-hungry of this acclaimed series’ fans. Ultimately, though, readers will be enthralled by the insightful, full-sensory exploration of Patpong and of modern expat culture, complete with flashbacks to the old-timers’ arrival after the Vietnam War.”
—Booklist

"The characters in The Hot Countries are finely detailed along with their vulnerabilities, tragic flaws, and mutual dependence. Hallinan takes us inside their dreams, nightmares, fears, and hopes, making them larger than fiction. They are characters that will stay with you."
—Christopher G. Moore, author of the Vincent Calvino series set in Thailand

Praise for the Poke Rafferty thrillers

“You could drown in the waves of corruption that surge through Timothy Hallinan’s Bangkok mysteries.”
—The New York Times Book Review

“One of the best series in the biz right now.”
—Craig Johnson

“Hallinan not only writes a relentless-as-the-rain paced thriller, sprinkled with an offbeat, cynical humor, but the poignant emotional sides of the characters and the intelligent  and beautiful plot and storytelling soak the reader’s heart to the skin.”
—Seattle Post-Intelligencer

“Truly remarkable . . . In Hallinan’s Bangkok, the ugly truths of poverty, homelessness, corruption, caste and crime are shaded with tremendous compassion.”
—The Arizona Republic

Timothy Hallinan has been nominated for the Edgar, Nero, Shamus, and Macavity awards. He is the author of eighteen widely praised books, including The Fear Artist, For the Dead, Crashed, Little Elvises, The Fame Thief, King Maybe, Fields Where They Lay, and Herbie’s Game, which won the Lefty Award for Best Humorous Mystery. After years of working in the television and music industries, he now writes full-time. He divides his time between California and Thailand.
Loading...
or
Not Currently Available for Direct Purchase