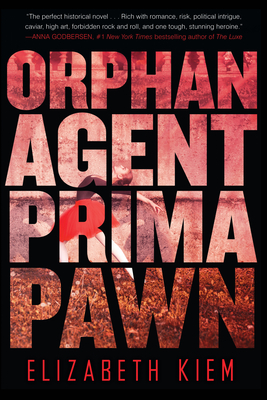 Moscow, 1958: sixteen-year-old ballerina Svetlana’s dreams come true when she is invited to join the Bolshoi Ballet, but not is all as it seems. Now Svetlana is caught between the sinister worlds of very powerful people in the regime and the KGB, and the other world—one she was trying to escape through dance, the gift she’s been afraid of her entire life.

The Bolshoi Saga: Svetlana is the third and final book in the series that is described as a feminist take on The Godfather, set in the world of Russian ballet.

The year is 1958, and sixteen-year-old Svetlana is stuck in a Moscow orphanage designated for the unwanted children of Stalin’s enemies. Ballet is her obsession and salvation, her only hope at shedding a tainted family past. When she is invited to join the Bolshoi Ballet—the crown jewel of Russian culture and the pride of the Soviet Union—her dreams appear to have been realized. But she quickly learns that nobody’s past or secrets are safe.

The dreaded KGB knows about the mysterious trances Sveta has suffered, inexplicable episodes that seem to offer glimpses of the past. Some very powerful people believe Sveta is capable of serving the regime as more than a ballerina, and they wish to recruit her to spy on the West as part of the nascent Soviet psychic warfare program. If she is to erase the sins of her family, if she is to dance on the world stage for the Motherland—if she is to survive—she has no choice but to explore her other gift.

The story of teenage Svetlana, matriarch of three generations of ballerinas, is both the end and the beginning of the Bolshoi Saga. This title, and the debut, Dancer, Daughter, Traitor, Spy and its follow up, Hider, Seeker, Secret, Keeper can all be read as stand-alone novels, although reading all three will provide a deeper understanding of the often thrilling—and surprisingly dangerous—world of the Dukovskaya ballerinas.

"Orphan, Agent, Prima, Pawn is the perfect historical novel: a story that could be told in no other era or place, with the most ruthless characters. Inventive as Elizabeth Kiem is, I wish she could conjure a time machine, too. Her sophisticated book is exactly what I craved as a teenager, rich with romance, risk, political intrigue, caviar, high art, forbidden rock and roll, and one tough, stunning heroine, already marked by history."
—Anna Godbersen, #1 New York Times bestselling author of The Luxe and The Blonde

"The infinite beauty of the ballet and the infinite cruelty of the methods of Soviet communism are expertly explored in this unusual and memorable thriller . . . a truly remarkable book."
—The Washington Times

"This final piece of the Bolshoi Saga is a satisfying though bittersweet conclusion, and it is artfully crafted to stand on its own, enticing readers to pick up the earlier volumes."
—Booklist

"I cannot say enough good things about Kiem’s writing. She shines a spotlight on the historical period of the Thaw, writing about it with as much realism, grace, and spirit as she does the internal life of an adolescent girl."
—Criminal Element

“A tangle of bad guys and intrigue . . . The results are enjoyably escapist.”
—The New York Times

“A hair-raising tale of lost illusions and self-discovery . . . A look behind the curtains at the dangers and obstacles of ambition.”
—Joy Womack, principal ballerina of the Kremlin Ballet

“Terrifying . . . Historical fiction meets spy thriller, Dancer, Daughter, Traitor, Spy is sure to keep you on the edge of your seat.”
—Dance Spirit Magazine

“Primal and raw, brutal in its examination of human behavior, and pulsing with tension . . . Kiem’s detailed knowledge of Russian language and culture adds just the right amount of authenticity to a thrilling adventure.”
—Lindsay Smith, author of Sekret

“This atmospheric, suspenseful story is one of devotion and deception, innocence and independence, friendship and love, music and dance, immigration and coming of age.”
—Booklist, Starred Review

Elizabeth Kiem studied Russian language and literature at Columbia University and lived in Russia immediately after the collapse of the Soviet Union. She is also the author of two other books in the Bolshoi Saga: Dancer, Daughter, Traitor, Spy and Orphan, Agent, Prima, Pawn, as well as several works of nonfiction. She lives in London.
Loading...
or
Not Currently Available for Direct Purchase