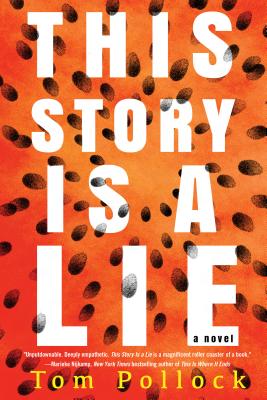 This Story Is a Lie

A YA thriller described as The Curious Incident of the Dog in the Night-Time meets John le Carré, about a teen math prodigy with an extreme anxiety disorder who finds himself caught in a web of lies and conspiracies after an assassination attempt on his mother.

Seventeen-year-old Peter Blankman is a math genius. He also suffers from devastating panic attacks. Pete gets through each day with the help of his mother—a famous scientist—and his beloved twin sister, Bel.

But when his mom is nearly assassinated in front of his eyes and Bel disappears, Pete finds himself on the run. Dragged into a world where state and family secrets intertwine, Pete must use his extraordinary analytical skills to find his missing sister and track down the people who attacked his mother. But his greatest battle will be with the enemy inside: the constant terror that threatens to overwhelm him.

Weaving between Pete’s past and present, This Story Is a Lie is a testimony from a  protagonist who is brilliant, broken and trying to be brave.

Praise For This Story Is a Lie…

Praise for This Story Is a Lie

"Revelatory about mental health, ingeniously constructed and a thrilling ride . . ."
—The Sunday Times

“In this dark and twisted thriller, nothing is what it seems; but Pollock’s greatest triumph is the portrait of a psyche at war with itself.”
—The Guardian

“At times dark and gory and illustrated with strong language, Pollock's paranoid world has real substance thanks to his skillful development of the characters.”
—The Irish Times

“Fans of the Bourne series, The Curious Incident Of The Dog In The Night-Time and all stories where everything is not as it seems will lap it up.”
—The Scottish Herald

"Gripping, dazzling, and pulse-pounding, Pollock’s YA debut is a thrill from the first page to the last . . . The final twist is well disguised and truly revelatory."
—School Library Journal, Starred Review

"[A] sophisticated, dark novel . . . Readers who thrill to the combination of mathematics and psychological suspense will be utterly enthralled."
—Booklist, Starred Review

"Unrelenting twists and turns . . . Even the last page will keep readers wondering if there's truth to the title."
—Kirkus Reviews

"This shape-shifter of a novel explores the tragic cost of family secrets and lies . . . a fascinating premise."
—Publishers Weekly

"This Story Is a Lie is easily one of the greatest page-turners I’ve read this year . . .  Intensely gripping because of its clever plot and memorable characters."
—Washington Independent Review of Books

"Dazzling. It's as though Escher and Schrödinger had collaborated on a thriller."
—M.R. Carey, bestselling author of The Girl With All the Gifts

"Unreliable. Unputdownable. Deeply empathetic. This Story Is a Lie is a magnificent rollercoaster of a book."
—Marieke Nijkamp, New York Times bestselling author of This Is Where It Ends

"Notable for its hi-octane drama but also its thoughtfulness in the story’s quieter moments . . . a tremendous read from start to finish."
—Geek Dad

"This Story Is a Lie is a terrific YA thriller. It’s enjoyable to read, the math underpinning provides solid food for thought without being too daunting for readers who may lack confidence with the subject, and Peter Blankman’s blurred perception of what’s happening to him intrigues us from the first page to the very last."
—New York Journal of Books

"An exceptional and deftly crafted thriller of a read from beginning to end, This Story Is A Lie showcases author Tom Pollock's genuine flair for character and narrative driven storytelling."
—The Midwest Book Review

"Incredible, my mind is blown."
—Katherine Webber, author of The Heartbeats of Wing Jones

"A dazzling, dizzying rollercoaster of a novel, about memory and family and other things you can't completely trust. It will twist your brain in the best possible way."
—Will Hill, author of the Department 19 series

"Exceptional, funny, bleak and emotionally brutal and had me permanently on the edge of my seat."
—Jack Grimwood, author of Moskva

"Taut, suspenseful and compelling . . . A very self-assured and breathtaking debut."
—Worth Reading? Worth Sharing! blog

Tom Pollock, described as “a powerful new imagination” by The Guardian, is the author of four novels and an ambassador for Talklife—the peer support network for youth mental health where he blogs about his experiences with depression, anxiety and bulimia (blog.talklife.co). Inspired by those experiences, This Story Is a Lie is his first thriller for young adults. He lives and works in London, and can be found on Twitter @tomhpollock.
Loading...
or
Not Currently Available for Direct Purchase