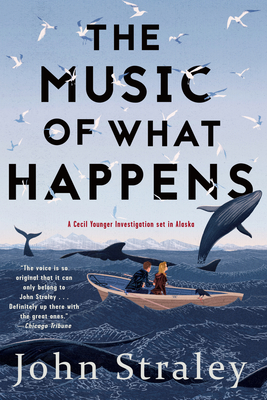 The Music of What Happens (A Cecil Younger Investigation #3)

In the third entry to the series, Alaska P.I. Cecil Younger is fresh out of rehab with a head wound, a child custody case from hell, and the clients to match.

Confrontational and obsessed, Priscilla DeAngelo is sure her ex is conspiring with a state senator to wrest her son from her, and thus, she hires Cecil Younger to investigate. This is the first time Younger has to deal with lawyers in flashy suits and overused paper shredders. When she storms off to Juneau for a showdown, Younger's custody case swiftly turns into a murder. Younger is fired from the defense team, but he can't stop thinking about the case, and keeps on with the investigation alone. He's not sure what keeps him involved. Is it Priscilla's sister (his lost love)? His regard for truth as a rare commodity? Or the head injury Priscilla's ex gave him?

But there's one thing he knows: he won't let go until it's solved, even if it kills him.

Praise for The Music of What Happens
“The voice is so original that is can only belong to John Straley . . . Definitely up there with the great ones.”
—Chicago Tribune

“A web of subplots adds to the depth of a story that encompasses possible organized crime, senatorial paper shredding and obsessive love . . .  The whirlwind ride leaves the reader gasping for breath, as Shamus Award-winning Straley tells a dark story illuminated by the wild vigor of both the Alaskan landscape and his own writing.”
—Publishers Weekly, Starred Review

Praise for the Cecil Younger investigations
“Strong and sobering . . . With his storyteller’s sense of dramatic action, [Straley’s] in his glory.”
—The New York Times Book Review

“Straley isn’t prolific, but when he does publish a book it’s a gem . . . It’s always a pleasure to read Straley’s vivid studies of these folks—the slightly cracked, rugged and very funny characters of the Far North.”
—The Seattle Times

“What a warm, engaging, profoundly human book this is: its skin crackling, its heart enormous and open. It's a mystery with judicious blasts of violence and dread, but it opens also onto the bigger mysteries—of community, of family, of place.”
—John Darnielle, lead singer of The Mountain Goats and author of Wolf in White Van

“Straley is one of the best prose stylists to emerge from the genre in a long time, and his evocation of the chilly, dangerous landscape and climate effectively sets a foreboding tone.”
—San Francisco Chronicle