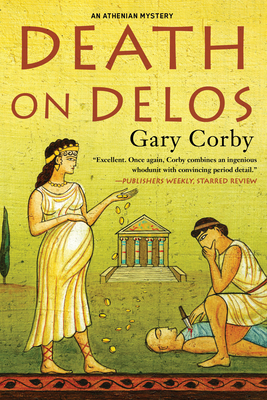 Death on Delos (An Athenian Mystery #7)

​In the seventh in Gary Corby's Athenian Mystery series, Nico and Diotima must solve a murder case while also preparing to have a baby. Set on the sacred island of Delos in 5th century BC, Death on Delos is full of humor and historical intrigue. ​

Greece, 454 BC: The sacred isle of Delos, the birthplace of the divine twins Apollo and Artemis, has been a most holy pilgrimage site for centuries. Delos is also home to the military fund kept by the Delian League, the alliance of city-states that defended Greece against the Persians, and that vast treasury is protected only by the priests and priestesses of the tiny isle and a scant armed guard.

Then one day the charismatic Athenian statesman Pericles arrives at the head of a small army to forcibly take the treasury back to the safety of Athens. With him are Nico, the only private agent in ancient Athens, and his heavily pregnant wife and partner in sleuthing, the priestess Diotima. She has been selected to give this year’s annual offering to holy Artemis.

In the face of righteous resistance from the priests, Pericles assigns Nico to bribe their leader. But before he can get very far with this dubiously unholy task, Nico ends up with a murder on his hands.

It is a crime against the gods to die or be born on the sacred island. Thanks to the violence over the treasury, the first blasphemy has already been committed. Can Nico solve the murder and get Diotima off the island before they accidentally commit the second?

Praise For Death on Delos (An Athenian Mystery #7)…

Praise for Death on Delos

"Excellent. Once again, Corby combines an ingenious whodunit with convincing period detail. This humorous and educational ancient historical series gets better and better with each entry.​"
—Publishers Weekly, Starred Review

"Refreshingly original...There’s so much to admire here: Corby seamlessly works in Greek myths and history; the details of everyday life, like rituals, coins, and food, are part of the fabric of the mystery; and Nicolaos and Diotima’s witty, sexy relationship seems like a BCE version of Nick and Nora Charles. Another outstanding entry in a consistently excellent series."
—Booklist, Starred Review

"In his brisk seventh mystery set in the world of ancient Greece, Corby highlights the crackling chemistry between the two leads and provides another helpful, amusing list of characters that includes a description of and a quotation from each of them."
—Kirkus Reviews

"​The amalgamation of energetic action, amusing characters, and fascinating story lines based on accessible and absorbing historical facts will delight new and old fans alike. Readers who enjoy the ancient world detective series by Lindsey Davis or Steven Saylor may also appreciate this title.​"
—Library Journal ​

​"All sorts of skullduggery take place . . . ​Gary Corby has the knack of combining history, humor, and untimely death in a way that's so entertaining readers may never realize that they're learning something. Death on Delos tells a fast-moving story involving the Nick and Nora Charles of ancient Athens.​"
—Kittling Books ​

“Corby blends the history lesson so well into the story that you won’t even need a spoonful of sugar.”
—San Jose Mercury News

“A fast-paced, enjoyable murder mystery that will make readers laugh and think in equal measure.”
—The Sydney Morning Herald

“Corby has not only made Greek history accessible—he’s made it first-rate entertainment.”
—Kelli Stanley, award-winning author of City of Dragons

Gary Corby lives in Sydney, Australia, with his wife and two daughters. He blogs at A Dead Man Fell from the Sky, on all things ancient, Athenian, and mysterious. He is the author of six other critically acclaimed Athenian mysteries: The Pericles Commission, The Ionia Sanction, Sacred Games, The Marathon Conspiracy, Death Ex Machina, and The Singer from Memphis.
Loading...
or
Not Currently Available for Direct Purchase