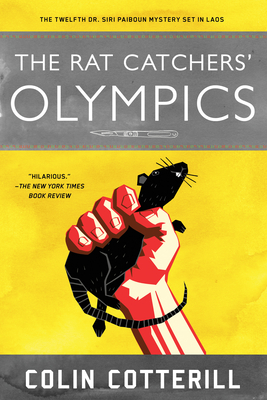 The 1980 Olympic Games in Moscow is already rife with controversy, but when a Lao athlete is accused of murder, it escalates into a full blown international incident. In the twelfth entry to the series, Dr. Siri Paiboun and his quirky team of misfits are on the case in a city and country foreign to them, yet familiar in its corruption of justice.

1980: The People’s Democratic Republic of Laos is proud to be competing in its first-ever Olympics. Of course, half the world is boycotting the Moscow Summer Olympic Games to protest the Soviet Union’s recent invasion of Afghanistan, but that has made room for athletes from countries that are usually too small or underfunded to be competitive—like Laos.

Ex-national coroner of Laos Dr. Siri Paiboun may be retired, but he and his wife, Madame Daeng, would do just about anything to have a chance to visit Moscow, so Siri finagles them a trip by getting them hired as medical advisers to the Olympians. Most of the athletes are young and innocent village people who have never worn running shoes, much less imagined anything as marvelous as the Moscow Olympic Village. As the competition heats up, however, Siri begins to suspect that one of the athletes is not who he says he is. Fearing a conspiracy, Siri and his friends investigate, liaising in secret with Inspector Phosy back home in Laos to see if the man might be an assassin. Siri’s progress is derailed when a Lao Olympian is accused of murder. Now in the midst of a murky international incident, Dr. Siri must navigate not one but two paranoid government machines to make sure justice is done.

Praise for The Rat-Catchers' Olympics

"The book ends with a rat-catching competition that is as bizarre as Dr. Siri’s wacky sense of humor. This is a unique series."
—Dayton Daily News

"You get a real feeling for what Laos was like in the '70s. The humor is wonderful, too."
─New York Post

"Along with a mystery that boils over into an international incident, Cotterill gives readers a wonderful re-creation of the 1980 Moscow Olympic Village and the preparations for the Games themselves."
—Booklist, Starred Review

“Cotterill excels in the portrayal of potentially serious and momentous topics with lighthearted humor, imbuing his characters with grace and empathy.”
—BookPage, Top Pick in Mystery

Colin Cotterill is the author of eleven other books in the Dr. Siri Paiboun series: The Coroner’s Lunch, Thirty-Three Teeth, Disco for the Departed, Anarchy and Old Dogs, Curse of the Pogo Stick, The Merry Misogynist, Love Songs from a Shallow Grave, Slash and Burn, The Woman Who Wouldn’t Die, Six and a Half Deadly Sins and I Shot the Buddha. His fiction has won a Dilys Award and a CWA Dagger in the Library. He lives in Chumphon, Thailand, with his wife and five deranged dogs.
Loading...
or support indie stores by buying on
(This book is on backorder)