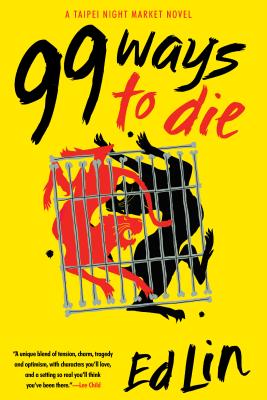 In Taipei, Taiwan, the kidnapping of a Mainlander billionaire throws national media into a tizzy—not least because of the famous victim’s vitriolic anti-immigration politics.

Jing-nan has known Peggy Lee, a bullying frenemy who runs her family’s huge corporation, since high school. Peggy’s father has been kidnapped, and the ransom the kidnappers are demanding is not money but IP: a high-tech memory chip that they want to sell in China.

Jing-nan feels sorry for Peggy until she starts blackmailing him into helping out. Peggy is worried the kidnappers’ deadline will pass before the police are able to track down the chip. But when the reluctant Jingnan tries to help, he finds himself deeper and deeper in trouble with some very unsavory characters—the most unsavory of whom might be the victim himself.

Praise for 99 Ways to Die

"99 Ways to Die immerses readers in urban Taiwan . . . Come for the dark world of the night market, and stay for the unpredictable, entertaining characters."
—Alfred Hitchcock Mystery Magazine

"Lin’s books are most appealing for the insider’s look at Taiwanese culture, the motley crew of supporting cast and the multiple laughs per page."
—BookPage

"Lin takes readers on a whimsical ride along with the reluctant Jing-nan, the overbearing Peggy, and some very shady characters, deftly mixing comedy, mystery, and drama in a page-turning story . . . This will appeal to readers who enjoy dark comedy, drama, and some very unexpected plot twists."
—Library Journal

"Top-notch international crime fiction that will have readers dreaming of a visit to the Taipei market."
—Booklist

"What a wonderful, wild ride this is."
—The Shawangunk Journal

"It'll definitely keep you guessing, and it'll keep you laughing from start to finish."
—BookBub

"[Lin] twist[s] his crime fiction in marvelous ways that incorporate almost as much humor as the master Donald E. Westlake."
—Kingdom Books

"Well-plotted."
—Stop, You're Killing Me!

“A stylish, smart thriller for the mind, heart, and gut. Sex, music, history, politics, food, humor, and just a touch of violence and death—you get it all. And when you're done, you’ll beg for more.”
—Viet Thanh Nguyen, Pulitzer Prize–winning author of The Sympathizer

“A unique blend of tension, charm, tragedy and optimism, with characters you’ll love, and a setting so real you’ll think you’ve been there.”
—Lee Child

“A sidewalk noodle shop in Taipei’s Shilin Night Market during summer’s Ghost Month is the vivid backdrop . . . The plot twists come fast and furious as the story reaches its climax. Come for the exotic food and fascinating setting; stay for the characters.”
—The Boston Globe

“Pure and perfect suspense and a book that is almost impossible to put down.”
—Crimespree Magazine

Ed Lin is a journalist by training and an all-around stand-up kinda guy. He’s the author of the Taipei Night Market series, Ghost Month and Incensed; his literary debut, Waylaid; and his Robert Chow crime series, This Is a Bust, Snakes Can’t Run, and One Red Bastard. Lin, who is of Taiwanese and Chinese descent, is the first author to win three Asian American Literary Awards. Lin lives in New York with his wife, actress Cindy Cheung, and son.
Loading...
or
Not Currently Available for Direct Purchase