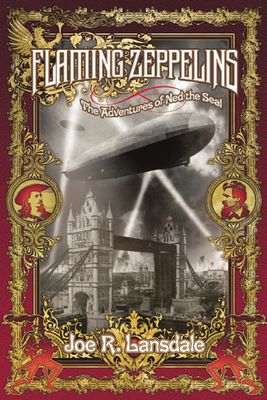 The Adventures of Ned the Seal

What do the disembodied head of Buffalo Bill Cody, Annie Oakley, Frankenstein, the Tin Man, Captain Nemo, the Flying Dutchman, and the inestimable Ned the Seal have in common? Find out as they embark upon a spectacular set of nonstop steampunk adventures. For the first time, two epic chronicles, Zeppelins West and Flaming London, inscribed by a courageous young seal on his trusty notepad, are collected together in one volume. Leap from a flaming zeppelin with the stars of the Wild West Show in a desperate escape from an imperial Japanese enclave. Wash up upon the island of Doctor Moreau, in mortal danger from his unnatural experiments (and ignorant that Dracula approaches by sea). Unite with Jules Verne, Passpartout, and Mark Twain on a desperate voyage to the burning streets of London, which are infested with killer squid from outer space courtesy of H. G. Wells's time machine. It's a raucous steam-powered locomotive of shoot-'em-up Westerns, dime novels, comic books, and pulp fiction, as only Lansdale, the high-priest of Texan weirdness, could tell.

Praise For Flaming Zeppelins: The Adventures of Ned the Seal…

"Only one of the wildest alternate-worlds, rip-in-space-time, sf-pastiche romps this side of 50s B movies."  Booklist

"Irrepressible, irreverent, and unpredictable, this hilarious fantasy with nostalgic touches of yesterday's SF shows off the narrative skills of an inventive author altogether comfortable in his metier."  Publishers Weekly

"One of the more versatile writers in America."  Los Angeles Times

"Like 10-alarm chili, Lansdale is pretty strong stuff . . . He has become a cult figure."  People Magazine

"Lansdale is a storyteller in the Texas tradition of outrageousness . . . but amped up to about 100,000 watts."  Houston Chronicle

"He may be violent, gruesome and shocking, but Lansdale is also one of the greatest yarn spinners of his generation: fearless, earthy, original, manic and dreadfully funny.laugh-out-loud funny, acquainted with the night and often acutely profound."  Dallas News

Joe R. Lansdale is the author of more than thirty novels, including the Edgar Award?winning Hap and Leonard mystery series (Mucho Mojo, Two Bear Mambo) and the New York Times Notable Book The Bottoms. More than two hundred of his stories have appeared in such outlets as Tales From the Crypt and Pulphouse, and his work has been adapted for The Twilight Zone and Masters of Horror. Lansdale has written several graphic novels, including Batman and Fantastic Four. He is a tenth-degree black belt and the founder of the Shen Chuan martial art.
Loading...
or support indie stores by buying on