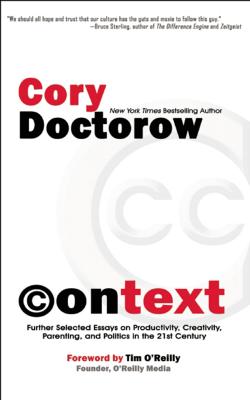 One of the Web's most celebrated high-tech culture mavens returns with this second collection of essays and polemics. Discussing complex topics in an accessible manner, Cory Doctorow's visions of a future where artists have full freedom of expression is tempered with his understanding that creators need to benefit from their own creations. From extolling the Etsy makerverse to excoriating Apple for dumbing down technology while creating an information monopoly, each unique piece is brief, witty, and at the cutting edge of tech. Now a stay-at-home dad as well as an international activist, Doctorow writes as eloquently about creating real-time Internet theater with his daughter as he does while lambasting the corporations that want to profit from inherent intellectual freedoms.

"Cory Doctorow's Context is a treat for those who live in the digital worldas well as for those who would like to know more about it." New York Journal of Books (August 2011)

"We should all hope and trust that our culture has the guts and moxie to follow [Cory Doctorow]. He's got a lot to tell us."  Bruce Sterling, author, Zeitgeist

"Cory Doctorow straps on his miner's helmet and takes you deep into the caverns and underground rivers of pop culture." Neil Gaiman, author, American Gods

"The most articulate and accessible writer engaged in these topics."  Time Out Chicago

"Context is a deeply interesting and thought-provoking book. . . . The resulting collection is golden: and an absolute must-read for anyone who's ever asked where all of this technology stuff is heading." —January Magazine (October 2011)

"Doctorow makes the complicated accessible throughout this great little guidebook, a GPS for the digital age." Publishers Weekly (August 30, 2011)

Cory Doctorow is a science-fiction novelist, blogger, and technology activist whom Entertainment Weekly called ?the William Gibson of his generation." He is the author of the best-sellers Little Brother, Makers, Pirate Cinema, and Homeland and the co-editor of the popular weblog Boing Boing. Doctorow is a contributor to the New York Times, Publishers Weekly, Wired, Locus, and many other newspapers, magazines, and websites. He was the director of European Affairs for the Electronic Frontier Foundation, a nonprofit civil liberties group that defends freedom in technology law, policy standards, and treaties.
Loading...
or
Not Currently Available for Direct Purchase