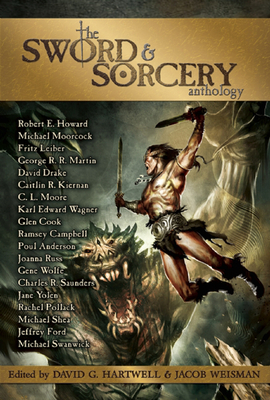 Blood will flow, heads will roll, dragons will soar, and the dead shall rise. Journey to ancient cities ruled by sinister mages, storm-tossed seas where monsters dwell, mysterious towers full of ancient secrets, and dark dungeons with untold treasures. From Robert E. Howard's Conan the Barbarian to George R. R. Martin's Song of Ice and Fire, join the legendary heroes and villains in nineteen epic adventures that are sure to bring out the barbarian in you. Anti-hero Elric infiltrates a band of mercenaries to match wits with a powerful sorcerer. With her trio of dragons, Daenerys Stormbringer makes a fool's bargain with slave traders. A mage's apprentice, the young Grey Mouser uses newfound power to battle an evil duke. Conan breaks into the Tower of the Elephant to steal a spectacular jewel with a dark secret. Despite her drunkard's ways, Malmury slays an old sea troll before facing his powerful daughter.

David G. Hartwell is a senior editor at Tor/Forge Books and the publisher of the New York Review of Science Fiction." He is the author of Age of Wonders, the editor of the anthologies The Dark Descent and The World Treasury of Science Fiction, and the coeditor of two anthologies of the best Canadian science fiction, Northern Stars and Northern Suns. He lives in Pleasantville, New York. Jacob Weisman is the founder, editor, and publisher at Tachyon Publications. His writing has appeared in the Cooper Point Journal, the Nation, Realms of Fantasy, the Seattle Weekly, and in the college textbook, Sport in Contemporary Society. He is the series editor for anthologies including The Secret History of Fantasy, The Urban Fantasy Anthology, and Crucified Dreams: Tales of Urban Horror. He lives in San Francisco.

Praise For The Sword & Sorcery Anthology…

Heroes and their mighty deeds populate the pages of this delightfully kitschy yet absorbing anthology of sword and sorcery short stories from the 1930s onward. Hartwell and Weisman have selected some of the best short-form work in the genre, starting with the originator, Robert E. Howard, and his tales of Conan the Barbarian. The heroes are tough, savvy, and willing to knock a few heads in to get the job done. The soldier of Glen Cook’s Dread Empire and Fritz Leiber’s Grey Mouser make strong appearances, as does Michael Moorcock’s Elric of Melniboné and his dread sword, Stormbringer. Female heroes are as ruthless as their male counterparts: C.L. Moore’s Jirel of Joiry walks through Hell and back to get her revenge, while George R. R. Martin’s Daenerys Stormborn becomes a true queen by outmaneuvering an entire city of slavers. This is an unbeatable selection from classic to modern, and each story brings its A game.”
Publishers Weekly, starred review

The 19 stories in this volume span a time period from 1933 to 2012 and provide a strong introduction to this fantasy subgenre.”
Library Journal

A big, meaty collection of genre highlights that runs the gamut from old-school classics to new interpretations, it serves as an excellent introduction and primer in one.”
Green Man Review

Hard and fast-paced fantasy that’s strong from the first piece right through to the last.”
Shades of Sentience

Hartwell and Weisman’s choices are top-notch and provide both an excellent introduction to the subgenre for new readers and exciting reading for long-time fans.”
Grasping for the Wind

This engaging anthology is a terrific way to meet some of the best fantasists for those unfamiliar with their works and for returning vets a chance to enjoy fun short stories.”
Midwest Book Review