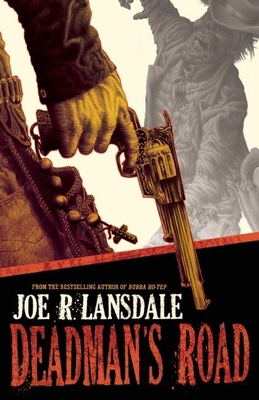 Deadwood meets Cthulhu in this wild and profane Western romp featuring zombies, werewolves, evil spirits, and one pissed-off gun-slinging preacher. The Wild West has never seen the likes of Reverend Jebediah Mercer, a hard man wielding a burning Bible in the battle between God and the Devil, in an endless struggle he's not sure he cares who wins. Laced with fast-paced action, nonstop humor, and spine-tingling horror, Deadman's Road is your ride to hell, in which a vengeful shaman curses the town by conjuring a seemingly unstoppable army of the undead; an ill-advised shortcut leads to a bees' nest of terror; a man stands condemned, not for murdering his wife but for raising the Lovecraftian horror that killed her; a woman is attacked by werewolves and left for dead in a ghost town; and a mining camp faces off with a horde of cannibalistic fiends.

Frequently including wonderfully cadenced stories-within-stories, the tales in Deadman’s Road provide Lansdale with a perfect canvas for his particular kind of humor/horror.”
Hell Notes

I love the grizzle, and I dig the misanthropy.”
Revolution SF

If you’re easily offended this may not be the book for you. Deadman’s Road is by no means for the faint of heart.”
My Shelf Confessions

Deadman's Road is an absolute joy to read and read againand a must-have addition to every right-minded reader’s bookshelf.”
Bookgasm

if you want something amusing, scary, and in-your-face? For that you need Joe R. Lansdale.”
SFFWorld

The master of such tales is undoubtedly Joe Lansdale. For over thirty years Lansdale has been writing western horror stories, setting the tone for all such stories that followed.”
Lit Reactor

It’s the mixture of horror, humor, and action elements that makes this collection a must-read for fans of dark literature.”
Buzzy

Joe R. Lansdale is the author of more than thirty novels, including the Edgar Award?winning Hap and Leonard mystery series (Mucho Mojo, Two Bear Mambo) and the New York Times Notable Book The Bottoms. More than two hundred of his stories have appeared in such outlets as Tales From the Crypt and Pulphouse, and his work has been adapted for The Twilight Zone and Masters of Horror. Lansdale has written several graphic novels, including Batman and Fantastic Four. He is a tenth-degree black belt and the founder of the Shen Chuan martial art.
Loading...
or support indie stores by buying on