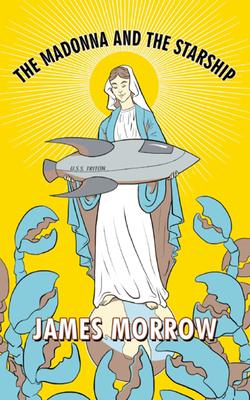 The Madonna and the Starship

Only Uncle Wonder can save us from the death beam of...
THE DIABOLICAL LOBSTERS FROM OUTER SPACE New York City, 1953. The golden age of television, when most programs were broadcast live. Young Kurt Jastrow, a full-time TV writer and occasional actor, is about to have a close encounter of the apocalyptic kind. Kurt's most beloved character (and alter ego) is Uncle Wonder, an eccentric tinkerer whose pyrotechnically spectacular science experiments delight children across the nation. Uncle Wonder also has a more distant following: the inhabitants of Planet Qualimosa. When a pair of his extraterrestrial fans arrives to present him with an award, Kurt is naturally pleased?until it develops that, come next Sunday morning, these same aliens intend to perpetrate a massacre. Will Kurt and his colleagues manage to convince the Qualimosans that Earth is essentially a secular and rationalist world? Or will the two million devotees of NBC's most popular religious program suffer unthinkable consequences for their TV-viewing tastes? Stay tuned for The Madonna and the Starship

James Morrow is the author of the World Fantasy Award-winning novel Towing Jehovah, the Nebula Award-winning novella Shambling Towards Hiroshima, and the New York Times Notable Book Blameless in Abaddon. His recent novels include The Last Witchfinder, hailed by the Washington Post as ?literary magic," and The Philosopher's Apprentice, which received a rave review from Entertainment Weekly. He is a master of the satiric and the surreal who has enjoyed comparison with Twain, Vonnegut, and Updike. Morrow lives in State College, Pennsylvania.
Loading...
or
Not Currently Available for Direct Purchase