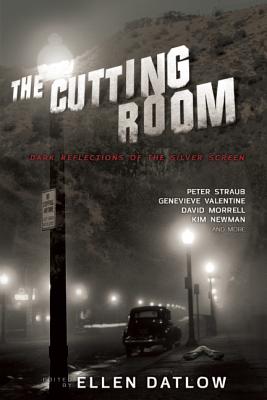 Dark Reflections of the Silver Screen

The credits have rolled, but the lights are still off. Something is lurking on the other side of the screen. There are dark secrets, starving monsters, and haunted survivors who refuse to be left on the cutting room floor. But that's okay, right? After all, everybody loves the movies.... Here are twenty-three terrifying tales, dark reflections of the silver screen from both sides of the camera. James Dean gets a second chance at life?and death. The Wicked Witch is out of Oz, and she's made some very unlucky friends. When God decides reality needs an editor, what?and who?gets cut? These award-winning, bestselling authors will take you to the darkest depths of the theater and beyond.

Praise For The Cutting Room: Dark Reflections of the Silver Screen…

"With her keen eye for craftsmanship, prolific anthologist Datlow always delivers first-class entertainment, whether her genre-at-hand is sf, fantasy, or, in this case, horror."
Booklist

"Anytime you sample a collection edited by veteran anthologist Ellen Datlow (Snow White, Blood Red; Teeth; Supernatural Noir), you know that you are in for a treat."
Shroud

"Datlow once again proves herself as a master editor..."
Arkham Digest

On Darkness: Two Decades of Modern Horror
"Make sure you are in a safe place before you open it up."
New York Journal of Books

"An anthology to be cherished and an invaluable reference for horror aficionados."
Publishers Weekly, starred review

"Darkness promises to please both longtime fans and readers who have no clue what 'splatterpunk' was supposed to mean."
San Francisco Chronicle

"Eclectic...a complete overview of some of the best horror stories published in the last twenty years."
SF Site

On The Year's Best Fantasy and Horror

"As the line between fantasy and horror blurs, this combined presentation of their exemplars will give readers of both genres much to enjoy, and may even broaden a few horizons."
Publishers Weekly, starred review

"Worth a space on any bookshelf."
Kirkus

Ellen Datlow is one of horror's most acclaimed editors. She was the fiction editor of OMNI for nearly twenty years, and edited the magazines Event Horizon and Sci Fiction. Her many anthologies include the Year's Best Fantasy and Horror series; Snow White, Blood Red; Lovecraft's Monsters; and Darkness: Two Decades of Modern Horror. Datlow has won multiple Hugo, Bram Stoker, Locus, and Shirley Jackson awards. She has received several lifetime achievement awards, including a World Fantasy Award?her tenth?in 2014. Datlow lives in New York City.
Loading...
or
Not Currently Available for Direct Purchase