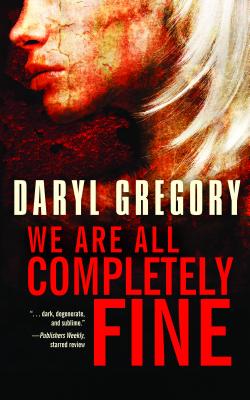 We Are All Completely Fine

World Fantasy Award Winner
Shirley Jackson Award Winner
Harrison was the Monster Detective, a storybook hero. Now he's in his mid-thirties and spends most of his time popping pills and not sleeping. Stan became a minor celebrity after being partially eaten by cannibals. Barbara is haunted by unreadable messages carved upon her bones. Greta may or may not be a mass-murdering arsonist. Martin never takes off his sunglasses. Never. No one believes the extent of their horrific tales, not until they are sought out by psychotherapist Dr. Jan Sayer. What happens when these seemingly-insane outcasts form a support group? Together they must discover which monsters they face are within?and which are lurking in plain sight.

Praise For We Are All Completely Fine…

Advance Praise for We Are All Completely Fine

Charming and horrifyingyou won't be able to stop reading it.”
Tim Powers, award-winning author of Declare and The Stress of Her Regard

A bright new voice of the twenty-first century...”
Library Journal

"Daryl Gregory [is]...a writer of startling depth and sensitivity, whose understanding of the delicate machinations of the heart trumps his need for superheroes, or even for neurology."
-Locus

"More than many novelists, Gregory’s work not only withstands but grows richer with re-readings and sustained attention."
-SF Signal

A quietly brilliant second novel.... A wide variety of believable characters, a well-developed sense of place and some fascinating scientific speculation.”
Publishers Weekly, starred review, on The Devil's Alphabet

Compelling and creepy...evokes the best of Stephen King.”
Kirkus on The Devil’s Alphabet

Raising Stony Mayhall, like all of Daryl Gregory’s stories and novels is so good that I grieved when I got to the last page.”
Chris Roberson, New York Times bestselling author of iZombie

Daryl Gregory is the award-winning author of We Are All Completely Fine, Pandemonium, The Devil's Alphabet, Harrison Squared, and Raising Stony Mayhall, which was named one of Library Journal's best books of the year. His comics work includes Planet of the Apes and Dracula: The Company of Monsters (with Kurt Busiek). His forthcoming novel, Spoonbenders, is a comedic tour de force starring a family of misfit psychics. Gregory lives in Oakland, California.
Loading...
or support indie stores by buying on