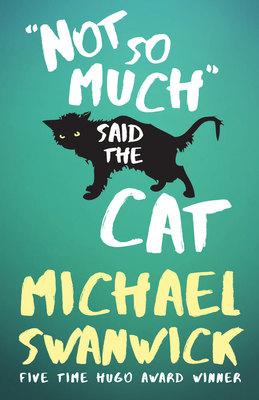 Not So Much, Said the Cat

The master of short science-fiction follows up his acclaimed collection The Dog Said Bow-Wow with feline grace, precision, and total impertinence. Michael Swanwick takes us on a whirlwind journey across the globe and across time and space, where magic and science exist in possibilities that are not of this world. These tales are intimate in their telling, galactic in their scope, and delightfully sesquipedalian in their verbiage. Join the caravan through Swanwick's worlds and into the playground of his mind. Discover a calculus problem that rocks the ages and robots who both nurture and kill. Meet a magical horse who protects the innocent, a confused but semi-repentant troll, a savvy teenager who takes on the Devil, and time travelers from the Mesozoic who party till the end of time...

Michael Swanwick is one of the most acclaimed science-fiction and fantasy short-story writers of his generation, having received an unprecedented five consecutive Hugo Awards. He is also the winner of the Theodore Sturgeon and World Fantasy awards. Swanwick's novels include The Iron Dragon's Daughter, a New York Times Notable Book, and the Nebula Award-winning Stations of the Tide. His short fiction has appeared in many venues, including OMNI, Penthouse, Amazing, Asimov's Science Fiction, New Dimensions, and Full Spectrum, and his work has been translated into more than ten languages. Swanwick lives in Pennsylvania.
Loading...
or
Not Currently Available for Direct Purchase