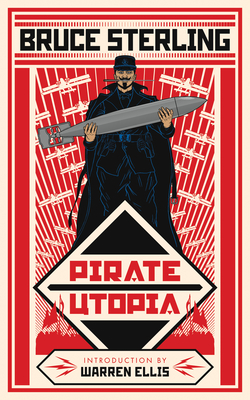 Original introduction by Warren Ellis, author of Transmetropolitan and Gun Machine Who are these bold rebels pillaging their European neighbors in the name of revolution? The Futurists Utopian pirate warriors of the diminutive Regency of Carnaro, scourge of the Adriatic Sea. Mortal enemies of communists, capitalists, and even fascists (to whom they are not entirely unsympathetic). The ambitious Soldier-Citizens of Carnaro are led by a brilliant and passionate coterie of the perhaps insane. Lorenzo Secondari, World War I veteran, engineering genius, and leader of Croatian raiders. Frau Piffer, Syndicalist manufacturer of torpedos at a factory run by and for women. The Ace of Hearts, a dashing Milanese aristocrat, spymaster, and tactical savant. And the Prophet, a seductive warrior-poet who leads via free love and military ruthlessness. Fresh off of a worldwide demonstration of their might, can the Futurists engage the aid of sinister American traitors and establish global domination?

Bruce Sterling (Schismatrix, The Zenith Angle, Zeitgeist) is an internationally-bestselling author, journalist, editor, columnist, and critic. He is perhaps best known for his ten visionary science fiction novels, as a founder of the cyberpunk movement, and as the editor of the quintessential cyberpunk anthology Mirrorshades. His much-heralded nonfiction includes The Hacker Crackdown: Law and Disorder on the Electronic Frontier, and The Epic Struggle of the Internet of Things. A renowned expert on technology, Sterling has appeared on ABC's Nightline, the BBC's The Late Show, MTV, and TechTV, and in Wired where he is a featured blogger, as well as in Time, Newsweek, the Wall Street Journal, the New York Times, Fortune, Nature, La Stampa, La Repubblica, and many other venues. Sterling splits his time among the cities of Austin, Turin, and Belgrade. Warren Ellis is the internationally-bestselling author of the graphic novels Transmetropolitan, Fell, Red, and Planetary, and the novels Gun Machine and Crooked Little Vein. His graphic novel Iron Man Extermis was the basis for the blockbuster Iron Man 3 movie. He has written for Vice and Wired UK and is currently at work on various projects. Ellis lives in London. John Coulthart is the World Fantasy Award-winning illustrator and designer of the iconic Steampunk anthology series, the The Thackery T. Lambshead Pocket Guide to Eccentric and Discredited Diseases, Lovecraft's Monsters, and Clive Barker's A?Z of Horror. He was the Artist Guest of Honour at Ars Necronomica 2015. Coulthart lives in Manchester, England. World Fantasy Award nominee Christopher Brown's novel Tropic of Kansas, about Americans trying to create their own liberated city-states, is forthcoming from Harper Voyager in 2017. His other fiction and criticism can be found at christopherbrown.com. He lives in Austin, Texas, where he also practices technology law. Mojo Press co-founder Rick Klaw is an editor, pop culture historian, reviewer, social media maven, and optimistic curmudgeon. His most recent editorial projects include The Apes of Wrath, Rayguns Over Texas, Hap and Leonard, and Hap and Leonard Ride Again. He lives in Austin, Texas.
Loading...
or support indie stores by buying on
(This book is on backorder)